“Time brought to us in our time of need the aid and arrival of a god. For there came that mightiest avenger, the victor Hercules, proud with the slaughter and the spoils of threefold Geryon, and he drove the mighty bulls here, and the cattle filled both valley and riverside.”

Nestled between the Aventine, Capitoline, and Palatine, the Forum Boarium was one of the oldest inhabited spots in the city of Rome. Archeological finds have placed the earliest settlement as far back as the 8th century B.C., though as with many Roman sites, the myths surrounding it are far more exciting. The forum lay on important thoroughfares of both land and sea, an ancient road connecting Etruria to Campania and the waterway of the Tiber, making it an ideal location for the city’s first harbor, the Portus Tibernus. 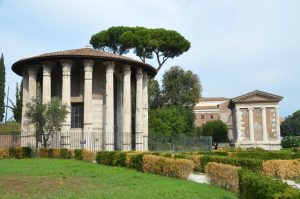 Unsurprisingly, it became a major market hub, and even after Rome expanded and other forums rose to prominence, the Forum Boarium, as the name suggests, remained Rome’s primary cattle marketplace. It was even the site of Rome’s very first gladiator combat. Of course, the name may have possessed older origins as well, reminiscent of gods, heroes, and minor deities and their bovine related adventures on the earth.

Back when gods, monsters, and heroes wandered the earth, the future site of Rome was terrorized by a giant named Cacus. He lived in a cave on the Aventine, overlooking the heart of the future city, near the place where the Porta Trigemina eventually stood. A monstrous shepherd, Cacus was a son of Vulcan and some sources claimed he was a fire-breathing giant who feasted on human flesh. The floors of his cave were “always reeking with new blood blood and nailed to the huge doorway, human heads hung grisly pale in grim decay.”

The Latins in the valley lived in fear of this “foul-featured, half-human monster,” and prayed to the gods for deliverance. The gods sent them Hercules. For his tenth labor, Hercules had been sent to the ends of the earth to bring back the cattle of the monster, Geryon. Having obtained the cattle, he drove them back through Italy and stopped to pasture them near the Seven Hills of Rome. As they were grazing in the fields and drinking from the river, Cacus approached and stole four of the finest bulls and four of the best heifers and made away with them to his cave, either dragging them backwards by the tails or forcing them to walk backwards so as to leave a false trail. 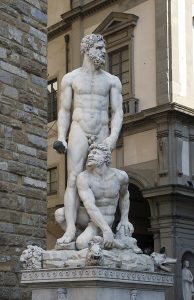 Hercules could not track the thief until he began to gather the cattle to leave the valley. “The cows began to low plaintively at leaving the place, filling the whole grove with their complaints, and bellowing to the hills they were leaving behind them. Then, deep in the cave, a single cow lowed in reply. Cacus had guarded her well, but she thwarted his hopes.”

In the Cavern above the Aventine

Hercules headed for Cacus in a rage, who fled, terrified, back to his cave and blocked the entrance with a huge rock, set there by his father Hercules. Even Hercules struggled to move the stone and force an entrance, and after three failed attempts, he instead climbed to the top of the Aventine and ripped the roof off the cave. “So Cacus was caught in the sudden rush of light and trapped in his cavern in the rock, howling as never before, while Hercules bombarded him from above with any missile that came to hand, belabouring him with branches of trees and rocks the size of millstones. There was no escape for him now, but he vomited thick smoke from his monstrous throat and rolled clouds of it all round his den to blot it from sight. 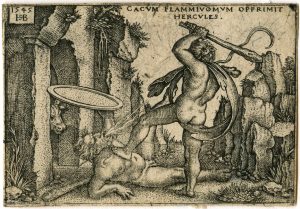 Deep in his cave he churned out fumes as black as night and the darkness was shot through with fire. Hercules was past all patience. He threw himself straight down, leaping through the flames where the smoke spouted thickest and the black cloud boiled in the vast cavern. There, as Cacus vainly belched his fire in the darkness, Hercules caught him in a grip and held him, forcing his eyes out of their sockets and squeezing his throat till the blood was dry in it.”

Hercules dragged the corpse out of the cave and the Latins could not get enough of gazing upon it, relieved at their deliverance. They lavished him with thanks and praise, and Potitius of the Latins set up the “Ara Maxima,” or great altar, of Hercules in the grove which became the Forum Boarium. A platform recently excavated in the church of Santa Maria in Cosmedin is believed to be the base of that altar. 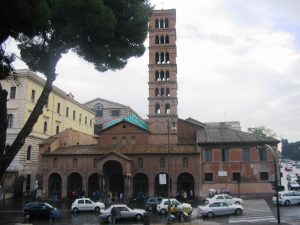 In Virgil’s epic poem, the Aeneid, the great Trojan hero Aeneas, founder of Rome, arrives in Italy and lands upon the site of the Forum Boarium, there seeing the white sow which was to mark the place foretold as his great kingdom. His arrival coincides with the Latins’ annual festival celebrating the defeat of Cacus by Hercules, and the gripping tale is told to Aeneas by Evander, King of the Latins, over the subsequent feast. 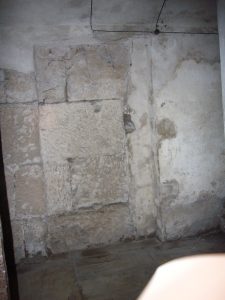 Stones from the podium of the Ara Maxima of Hercules – now in the crypt of the Santa Maria in Cosmedin church. By I, Lalupa, CC BY-SA 3.0.

Although the original temple and great Ara Maxima of Hercules that supposedly met Aeneas upon arrival no longer stands, the Forum Boarium holds a later temple of Hercules, dating to around the 2nd century B.C., which is well worth a visit. Legends say that the temple was so holy that neither flies nor dogs would dare to enter it.

The Forum Boarium, and more specifically the same Byzantine era Church of Saint Mary in Cosmedin which stands over the Ara Maxima of Hercules, also houses a modern mythological attraction, La Bocca della Verità or “The Mouth of Truth.” It is a large, round stone engraved with the open mouthed face of a bearded man, most likely a representation of Oceanus, the Titan god of the sea. Alternative theories generally assert that its original purpose may have been that of a drain cover on the floor of the Temple of Hercules Victor. It might have been as simple as a water drain, as the temple was built with an open oculus in the roof. Alternatively, it may have drained away the blood of cattle sacrificed in the temple to honor Hercules. 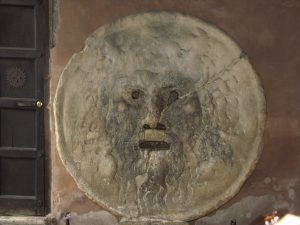 Modern superstitious maintains the legends which arose in the Middle Ages, which assert that the mouth will bite off the hand of liars. Considering the throngs of visitors who line up to photograph themselves with their hands in the mouth of the carving, it doesn’t seem likely that he chooses to bite very often.

During the Empire, the Forum Boarium continued to develop as a commercial centre while in late antiquity its temples were either Christianised or built over. One of its churches, the Byzantine Basilica of Saint Mary in Cosmedin, was built over a temple to Hercules, and is the present site of the area’s most famous attraction: La Bocca della Verità or “The Mouth of Truth”.

The Forum Boarium is home to two arches: the fourth century AD quadrifrons Arch of Janus, which has yet to be restored, and the Arch of the Money Changers. The latter, a Severan era arch dedicated to the imperial family by a group of bankers, is well worth visiting – if you know what to look for – because it displays an early example of damnatio memoriae, or the erasure of someone’s name and image from public records and monuments. 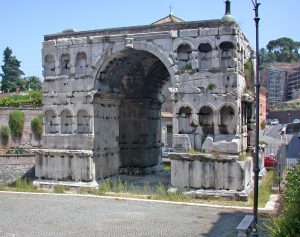 Arch of Janus in the Forum Boarium. Public Domain. 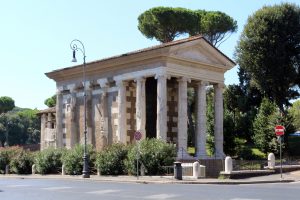 Temple of Portunus in the Forum Boarium. By Michael aus Halle, CC BY-SA 3.0.

Also in the vicinity is the single remaining arch of the second century BC Pons Aemilius (or, as it’s known in Italian, the Ponte Rotto or “Broken Bridge). 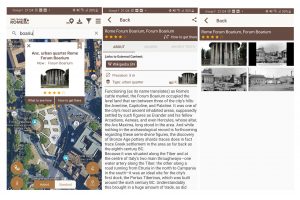