The specific origins of Antium remain unclear, but archaeologists believe that the Volsci were not the first residents. Later Roman myths would claim that Anteias, the son of Odysseus, founded Antium in the aftermath of Troy. The Romans found themselves in frequent conflict with the Volsci tribe, who made their capital in the city. Antium was a center point in the Roman wars with the Volsci, the backdrop to Shakespeare’s epic play Coriolanus.  The city later morphed from the center of strife to a luxurious resort and tourist town.

The third and lesser known Roman play by William Shakespeare tells the tragic story of Gaius Marcius Coriolanus. A semi-legendary figure, historians over the years have questioned the truth of his existence. Modern scholars tend to believe he was real, but that some of his deeds may have been exaggerated. Multiple ancient historians write of Coriolanus as a factual individual, and it is specious to dismiss them all entirely. Shakespeare based his epic tragedy largely on the Life of Coriolanus by Plutarch. The material is certainly worthy of dramatic depiction.

Born Gaius Marcius, he was a Roman general with a dim view of the masses, making him unpopular. Still, he won great acclaim for his valiant service in the wars with the Volsci. As the Roman army laid siege to Corioli, the Volsci sent soldiers from Antium to relieve the city. Cominius, the consul and leading general, turned the army to face this new threat. He left Titus Lartius, and Gaius Marius under him, to maintain the siege. With the majority of the Romans now gone, a group of Volsci sallied from Corioli to attack. Initially victorious, they chased the Romans back to their camp. There, Marcius and some of his best soldiers darted out to counterattack. He was a vigorous and inspiring soldier, and he rallied the Romans and chased the Volsci back to Corioli. Most of the Romans stopped at the gate, but Marius charged into the city with only a few men. 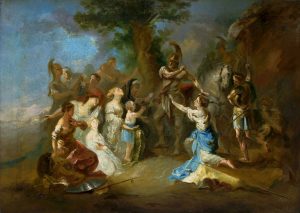 Coriolanus at the gates of Rome. By Franz Anton Maulbertsch, Public Domain.

Seeing how few attackers they faced, the Volsci surrounded them. Marcius “waged a combat in the city which, for prowess of arm, speed of foot, and daring of soul, passes all belief” (Plutarch).  He pushed the enemy back, and set fire to many houses within the city. Most of the soldiers busied themselves pillaging Corioli. Martius, however, rebuked them for their greed when battle raged on elsewhere. He led his small group of loyal soldiers to find Comitius in battle with the Volsci from Antium. They caught up with them before the fighting had begun, and Martius begged to face the enemy’s best soldiers. Comitius granted his request, and the battle began.

Martius fought madly in the battle and helped to rout the enemy. When his friends tried to convince him to withdraw and rest, as he was exhausted from battle and heavily wounded, he responded that “weariness was not for victors,” and took off after the fleeing enemy. Comitius honored Martius for his bravery with the cognomen Coriolanus, and he was well-loved for a time. However, Coriolanus retained his callous views of the people. He suggested harsh measures, was eventually put on trial, and rather than appear in court, he fled the city. He went to the Volsci, and offered his services to them, leading them in an assault on Rome. The siege was only broken off when his beloved mother came out to plead with him. He capitulated, and called off the attack, only to be killed by the betrayed and angry Volsci.

Defeat of the Volsci

As years of peace passed, Antium became an ever more popular resort and tourist town. It boasted an original work by Pythagoras, which brought many visitors, and was also a favorite imperial getaway. Not only that, Antium was the hometown of two Roman emperors, Caligula and Nero. Nero especially loved the town, and built both a new port and an expansive villa there. Several later emperors, including Domitian, Hadrian, and Septimius Severus enjoyed and expanded upon the imperial residence. Until as late as 537 A.D., Nero’s port remained busy. It fell into disuse sometime within the following two hundred years. The city remained largely abandoned until the eighteenth century.

What to See Here ?

The remains of the superb Villa Imperiale Neroniana are visible from the modern beachfront, carved impressively into the rock. Yet to attribute the impressive complex solely to the mad, bad, and dangerous-to-know Emperor Nero would be misleading. The vaulted spaces, pavilions, manmade caves, and luxury constructions (such as spas) actually date back to the late Republic.

Almost nothing remains of Nero’s port; most of it has sunk beneath the Port of Innocenzo. But attached to the Villa of Nero is the Archaeological Museum of Antium. Occupying the ground floor of the seventeenth century Villa Adele, the museum is well worth a visit. It documents Antium’s notable history through snippets of ancient texts and a host of artefacts unearthed during excavations.

Check our app to learn more about Antium and 5000 other ancient sites and monuments. 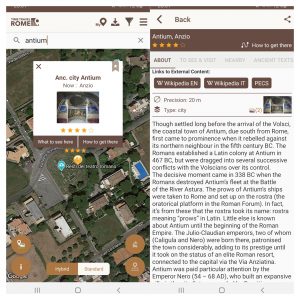