Korkyra – A Sanctuary of the Mythological

Modern day Corfu, known in ancient times as Korkyra, is another island with a history steeped in mythology, from its origin story to its place in several more famous legends. Korkyra was one of the three most powerful maritime nations in the Classical world, joining Athens and Corinth in that distinction. Its original inhabitants are not well understood by historians, though traditional tales offer an explanation. However, by about 730 B.C., Korkyra had received an influx of Corinthian colonists. Despite this connection to Corinth, Korkyra remained largely at odds with her mother city, choosing instead to ally with Athens.

Roman Baths of Palaiopolis on Corfu, By Alkis Pappas – Own work, CC BY-SA 4.0.

During the Hellenistic period, Korkyra endured several sieges and occupations, changing hands throughout the frequent wars and infighting that followed the death of Alexander the Great. With the rise of Rome, Korkyra became an important Roman naval base, eventually attached to the province of Macedonia. It served as Octavian’s base of operations leading up to his confrontation with Mark Antony and Cleopatra at the Battle of Antium.

What’s in a Name

Korkyra has been given several names throughout history. Before being called Korkyra, the island was apparently known as Drepane, which means scythe. The name likely derived from the sickle shape of the island initially, but it has come to refer to other mythological moments. Apollonius indicates that the island’s name referred to the sickle that Cronus used to castrate his father, Uranus. The sickle was said to be hidden somewhere on the island, and the inhabitants, known as Phaeacians, descendants of Uranus’s blood. Another account says that the sickle hidden on the island belongs to Demeter. 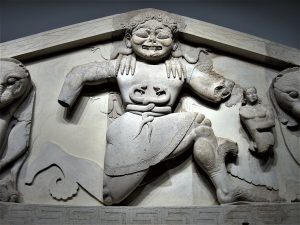 The name Korkyra originally belonged to a beautiful nymph, daughter of the river-god Asopus and sister to Aegina, who also gave her name to a Mediterranean island. Poseidon fell deeply in love with Korkyra, and carried her off to the Grecian island, which in his rapture he named after his new lover. Poseidon and Korkyra had one son, Phaiax, whose name became that of the people of Korkyra, the Phaeacians. The name also may bear some link to the monstrous Gorgon, Medusa, slain by Perseus. An image of the Gorgon featured prominently on the west façade of the temple of Artemis on Korkyra. 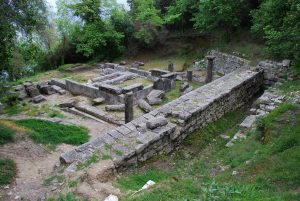 Korkyra proved to be a welcoming and hospitable island, offering sanctuary to multiple famous figures in mythological accounts, including Jason and the Argonauts. A hero and heir descended from Hermes, Jason was challenged to retrieve the Golden Fleece in order to reclaim his rightful throne. After numerous adventures during their travels, Jason and his Argonauts arrived in Colchis. The king offered to surrender the Golden Fleece only if Jason performed three tasks – designed to be impossible. Luckily for Jason, the king’s sorceress daughter, Medea, had fallen for the mysterious stranger and assisted him in completing the tasks, absconding with the Golden Fleece, and fleeing the island. On their return journey, pursued by the Colchians, they landed at Korkyra and were welcomed by King Alcinoos. Jason and Medea were married on the island of Korkyra in “Medea’s Cave.” 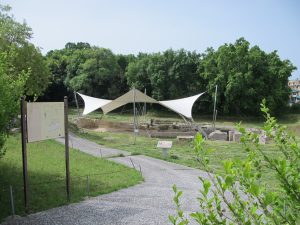 Ruis of the roman baths in Palaiopolis, By Kritzolina – Own work, CC BY-SA 4.0.

The same king also aided another, very famous hero. In Homer’s Odyssey, Odysseus and his men are shipwrecked near Korkyra and washed ashore on the island thanks to the guidance of Athena. The Princess Nausikaa, washing her clothes in a nearby stream with some friends, found Odysseus and brought him to her father. King Alcinoos not only gladly hosted the hero, but even presented him with the gift of a ship to take him back to his home in Ithaca. Unfortunately, the ship did not survive the journey, but was turned to stone by Poseidon, still infuriated at Odysseus for blinding one of his sons, the Cyclops.

One of the most famous modern structures on the island also has a connection to mythology, though only through admiration not through tradition. In 1890, the Empress of Austria built a summer palace on Korkyra called the Achilleion. The structure is meant to evoke ancient Grecian architecture and the sprawling palace is covered with paintings and statues dedicated to the great hero, Achilles. 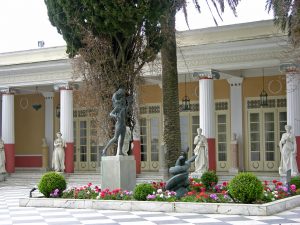 Korkyra’s Old Town is on the UNESCO World Heritage List, but much of this is a result of the medieval fortifications in the city that were built to protect it from invasions by Pirates and the Ottomans. That being said, there are a few traces of the city’s classical past to be seen.

The most prominent classical remnant in Korkyra is the Sanctuary of Artemis, near the Monastery of St Theodore. Dated to about 585 B.C., it is one of the most archaic pseudoperipteral – which simply means free-standing columns at the front, whereas the side columns are engaged, meaning they’re built into the cella wall – Doric order Temple. The temple’s significance derives from its mythological decoration. 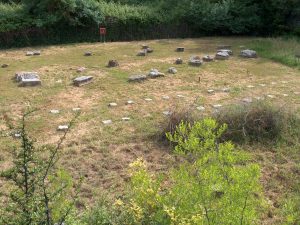 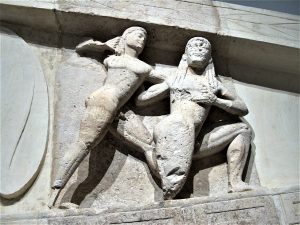 Titanomachy at the Gorgon pediment at Artemis Temple in the Corfu museum. By Dr.K. – Own work, CC BY-SA 4.0.

There are a few early Christian remains in Korkyra, including the Church of Haghia Kerkyra.
A range of sculptural remains, and other smaller-scale recoveries from the city, are display in the archaeological museum. 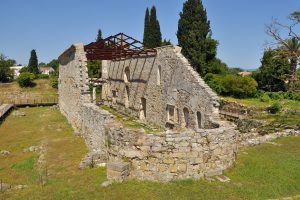 Ruins of Agia Kerkyra church or Paleopoli Basilica, By Marc Ryckaert (MJJR) – Own work, CC BY 3.0.

Ancient Kerkyra is among hundreds of Classical sites featured in the TimeTravelRome app: 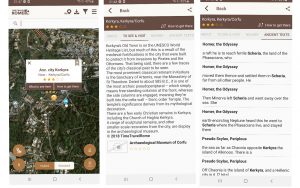 Header image: Горгона храм Артеміди Корфу (from the pediment of the Artemis Temple), By Liubomir G – Own work, CC BY-SA 4.0.