The Villa Dell’Ambulatio in Baia

The archaeological park of Baia stands out not only for the important remains of Roman civilization, but also for the beauty of the environment and landscape. You can see the Baths in a unique landscape, and with a view of the Golfo di Bacoli, where you can found a sort of “Roman Atlantis” that is a part of the ancient city of Baia, which was submerged by the sea.

The site is part of the “Parco archeologico dei Campi Flegrei”, that is located between Pozzuoli, Cuma and Capo Miseno. This area was appreciated for the beautiful landscape even in the ancient times.

In particular the ancient city of Baia (Baiae in Latin), was famous for its thermal water and was a place where ancient Romans loved to go on holiday, since the 2nd century B.C., where we can set the date of the most ancient archaeological remains. Then, in Baia where built many villae, where many important people and Emperors could practice otium, to escape the frenetic life in Rome. 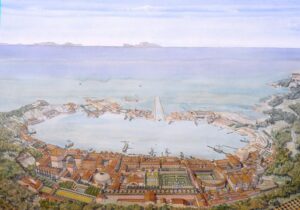 The ancient Baiae. By Jean-Claude Golvin.

The city, according to Strabo, was named after Baio, who was the helmsman on Ullyses’ ship and was buried in that place. Many ancient writers, for example Ovidius and Cicero describe this city or write about facts happened there. The popularity of Baia lasted until the 5th Century A.D., when because of bradyseism, the area started to collapse progressively, and in the 7th Century A.D. part of the city and the ancient harbor was entirely submerged. 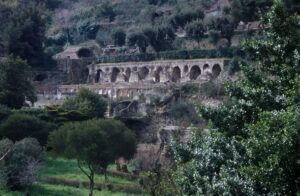 View of imperial complex in Baia. By Tyler Bell – View Of Imperial Complex, Baia, CC BY 2.0.

The archaeological site includes different buildings and it is possible to found some relevant nucleus. The most ancient part (2nd century B.C.) is the “Villa dell’Ambulatio”, that was named after a covered colonnade that is part of the building.

The structures of the Villa are partly well kept and give the visitor a general idea of a typical Roman villa. The original structure dates back to the end of the 2nd, beginning of the 1st century B.C, but its actual aspect is generally dated to the 1st century A.D. for the building technique with opus reticolatum. 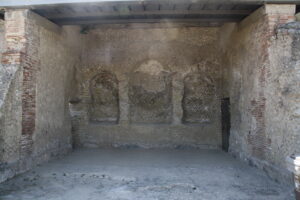 One of the rooms of the Villa – built in opus reticolatum. Photo by Michel Gybels.

Considered first as a great thermal bath, it was generically defined as a terraces complex because of the particular disposition of the structures on a series of artificial basements (basis villae) descending to the sea, according to a building technique typical of many Roman residences. 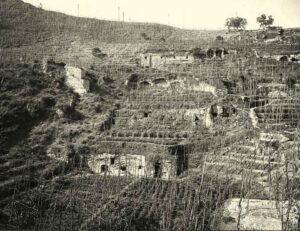 To visit the monument it’s best to start from the first terrace situated on the mountain, where the residential area is. Going up the north flight of stairs, one arrives to a series of sitting rooms, situated on the west side with floors in opus sectile or in mosaic and walls originally covered with marble. A great panoramic room, a nice peristyle and an apsidal room situated at the south extremity are visible. 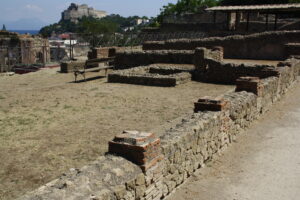 The upper part of the Villa. Photo by Michel Gybels.

From the south flight one can go down to the second terrace occupied by the ambulatio. This terrace was the basement of the villa situated on the superior level and later was transformed in a covered portico, divided in two naves by a series of pillars connected with arches. 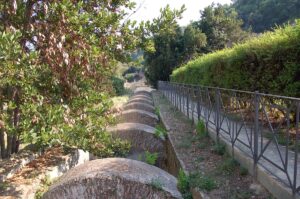 Along the west side, centrally, a big room opens with a rectangular plan with exedra and three niches on the lateral walls. Along the portico various architectonic fragments are exposed, found in the waters of the port of Baia, and formed the marble decoration of some structures connected to the imperial Palatium of the Severi’s Age (3rd century A.D.) 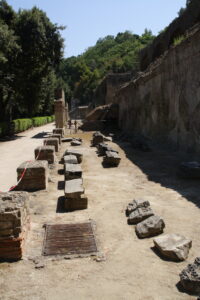 Portico area with architectural details of the Villa. Photo by Michel Gybels.

Proceeding south, one goes down the stairs which surround the entire complex along the complete south side. After the two flights one enters on the left into the third terrace, actually occupied by a garden. Also this terrace can be considered as an ambulatio with pillars which supported the vault covering.

Continuing down the south stairs one arrives at the level of the fourth terrace, characterized by two parallel corridors above which a series of rooms opens, considered as an area for the service personnel. 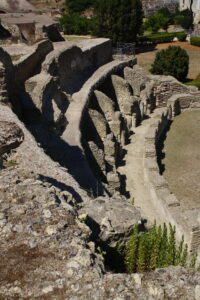 Semi-circular structure at the base of the hill. Photo by Michel Gybels.

On the south stairs one can go down for two flights to arrive then at the level of the fifth terrace. On the left one enters directly in a room which is the first of a series of rooms all facing the sea. Along the west side the original wall of the basis villae is visible, constituted by an architectonic façade with blind arcades and half columns. Then it was included in the opposite rooms built later. There is also a rectangular room which is covered and floored with marble. Some flights led to the superior level, to enter other rooms, at north, which have been destroyed, and to go down to the last terrace. 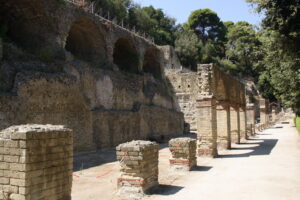 The sixth terrace is made up of a wide open area, destined to be a garden, with a series of rooms on the south side, surrounded on the west by the long supporting wall of the upper level. Probably in a more ancient phase the garden was surrounded by a peristyle but a sure interpretation of this wide area is difficult because there have been a lot of work done in a successive age to search for underground thermal waters. 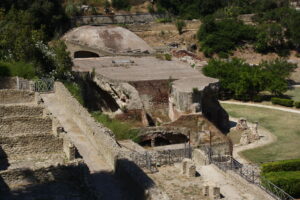 The lower part of the Villa. The dome of the Temple of Mercury can also be seen. Photo by Michel Gybels.

The decorations and the artifacts from this very interesting archaeological site are exposed in the  Museo dei Campi Flegrei, in Baia. There are also objects from the sites of Linternum, Miseno, Pozzuoli and Cuma. The Museum is located in the Aragonese Castle, build in the 16th century, which includes in its area remains of Julius Caesar’s villa. 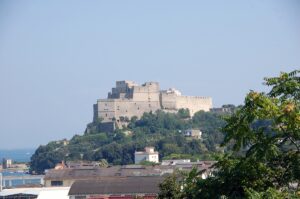 Source: Information boards on the site