Exhibition Rome, the City and the Empire at Louvre in Lens

As part of their temporary closure at the Louvre in Paris, the Roman rooms are moving to the Louvre in Lens. This exhibition at the Louvre-Lens Museum offers a gigantic retrospective on Roman civilization, from its legendary foundation in 753 BC to the fall of the empire in 476 AD. It invites visitors to discover Roman art and civilization through the great subjects that shaped Rome and contributed to its greatness and fascination. 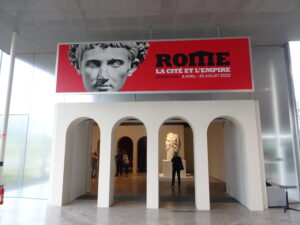 Rome, the City and the Empire – Exhibition at Louvre Lens.

The greatest masterpieces from the Roman collections of the Louvre Museum in Paris are presented on this occasion to tell the story of Rome, its empire and its art. Few museums outside Italy have a collection of antiquities that offers such a broad overview of Roman art as the Louvre. 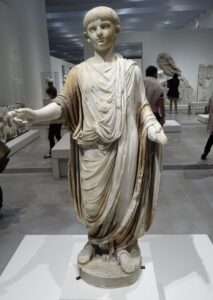 Statue of Nero as boy. 1st century AD. The boy wears the “toga praetexta” over a tunic and a “bolla” is worn around the neck. The right hand was restored. From Borghese collection. In Louvre since 1807.

Roman civilization expressed itself through all the arts of its time and spread on a very large scale, even to the present-day region of Hauts-de-France, which in ancient times was part of the province of Belgian Gaul. Its artistic models spread on a large scale and mixed with other traditions in many regions. 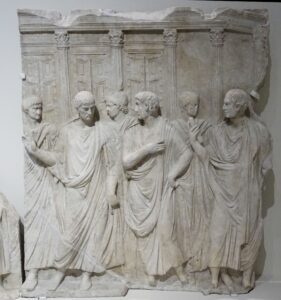 Relief from the Forum Trajan. It shows a sacrificial procession with emperor Trajan in tunic and toga, surrounded by lictors. In the background the temple of Jupiter Capitolinus. Rom, early 2nd century AD. From Borghese Collection. In Louvre since 1807. 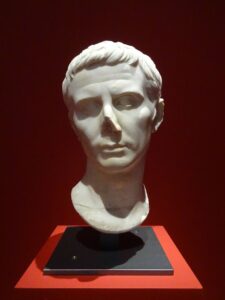 Bust of Augustus. Rome. End of 1st century BC / beginning of the 2nd century AD. From Borghese Collection. In Louvre since 1807.

In its open society, art was expressed both through official and popular commissions as well as through popular manifestations. This artistic heterogeneity reflects the great social, cultural and geographical diversity of an empire that stretched from Western Europe to the Near East and whose history spans more than thirteen centuries. 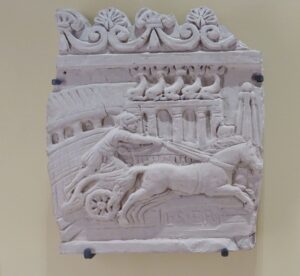 A so called “Campana Plaque” showing chariot race. In the background – a lap counter in the shape of five dolphins. Dated to the 1st-2nd centuries AD. Acquired by Louvre in 1825.

From the work of the mind to that of the fields, from the entertainment of the theatre, the circus or the hunt to the pleasures of banqueting, bathing, grooming and love, Roman art represented everything, paying equal attention to the details of official or private, imperial or popular life. 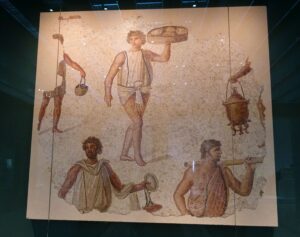 Fragment of a floor mosaic: the preparations for a banquet. About 180-190 AD. In Louvre collection since 1891. 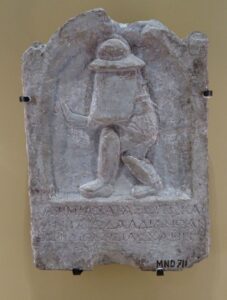 Variety of techniques and themes

The exhibition mixes materials and techniques, alternating large-scale works with more modest objects. The entire exhibition is organized around major themes that do not ignore the chronology of this fascinating civilization. 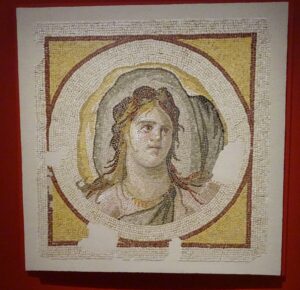 Mosaic dating from 200 / 225 AD. Found in Antakya (Antioch on Orontes) in 1934, in the house of the Psyches. The portrait is probably an allegory of Oceanide.

The more than four hundred unique exhibits offer a fascinating view of the politics, urbanization, religious and artistic experience, as well as the social and geographical aspect of that rich Roman civilization, which is also inextricably linked to the ancient Greek world. 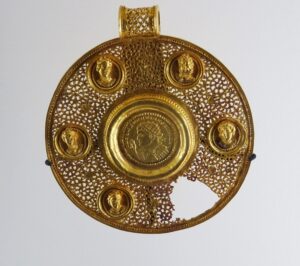 Part of a necklace. 350-400 AD, possibly from Constantinople. At the center – aureus of Constantine I; surrounded by 3 busts of women, an old man, and a young man. 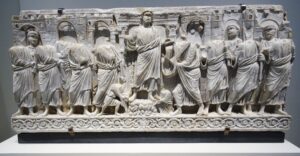 Sarcophagus depicting Christ in the midst of the apostles, called “Traditio Legis”. It was found in Rome in the mausoleum of the Anicii, under the apse of St. Peter’s in the Vatican. The four sides of the sarcophagus were dispersed: three (front and sides) are in the Louvre and the fourth in Rome in the Palazzo dei Conservatori. The pieces in the Louvre come from the Borghese collection (purchased in 1808).

Roman culture presents very strong peculiarities. Rome developed its own political organization, visual culture, religious concept and original customs. This rich culture simultaneously fed on the many influences from the Mediterranean world and especially from the Greek ancient world, the ideal of the time. 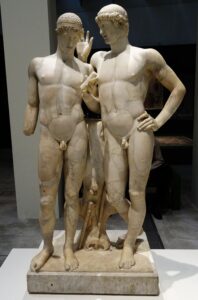 Orestes and Pylades, 1st century AD from a Greek original. It was carved by Pasiteles, Greek sculptor active in Rome in the first century BC. From Borghese collection; in Louvre since 1807.

The universal pretensions of the rulers soon multiplied as the city opened up to the many annexed provinces: the local elite acquired Roman citizenship, engaged in an imperial career and the wealthiest citizens from the provinces participated in the Senate. Several Roman emperors originated from these provinces in the second century AD. 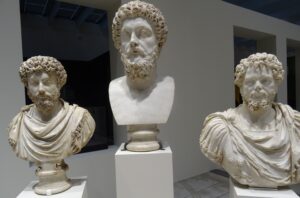 Busts Roman Emperors: Two busts of Marcus Aurelius found in 1674 at near Rome in Acqua Traversa. The first depicts a young Emperor, and the second – the Emperor in a more advanced age. The third bust is of Septimius Severus.

This prestigious exhibition focuses on the contribution of Rome’s citizens to the city’s political system, as well as on the Senate, the magistracy, the imperial cult, architecture, literature, dramaturgy and philosophy, which all together left a great mark on the ancient city. Furthermore, extensive attention is paid to the military exploits and the religious cults in the Roman Empire. 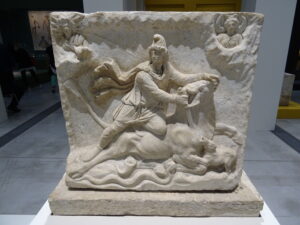 Mithra relief found in 1926 in Fiano Romano. Part of the permanent Louvre-Lens collections.

In short, the exhibition offers the visitor a fascinating and penetrating insight into virtually all aspects of life in ancient Rome. 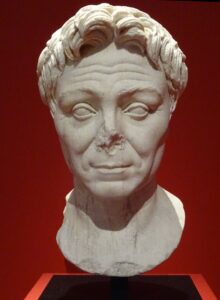 Portrait of Pompey the Great, 3rd quarter of the 1st century BC. Acquired by Louvre in 2017.

In addition, several panels and maps provide clear explanations in French, English and Dutch. The exhibition still runs until 25 July 2022.