Roman Nijmegen and the Valkhof Museum

Nijmegen is by far the most important location of Roman Netherlands. This is where the Roman era of the Netherlands began with the arrival of two legions in 19 BCE. The Romans also built here the first, oldest and biggest city of the Netherlands, Ulpia Noviomagus. Nijmegen played an important role as a military, administrative, economic and logistic center in the direct hinterland of the Limes.

In the long period of five centuries of Roman times the appearance of Nijmegen changed drastically several times. At first sight, this makes the story of Nijmegen somewhat confusing – everywhere there are remains from various periods – but this is precisely why it is so special and interesting. Moreover, there is still a lot of information hidden in the ground, waiting to be discovered.

The Valkhof hill has played an important role in Roman Nijmegen in two periods. In the early Roman period, from about 12 BC, Oppidum Batavorum was situated here, the capital of the district of the Batavians. The name literally means ‘fortified place of the Batavians’. In the year 70, the Batavian rebel leader Julius Civilis set fire to the town. After that, a completely new capital arose in Nijmegen-West (Noviomagus). 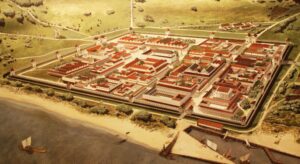 Noviomagus in Nijmegen-West ceased to exist around 300 of our era and the population concentrated again around the Valkhof. To this end, the Romans built a stone fort or castellum at the Valkhof. This late-Roman castellum probably also served as accommodation for the emerging Frankish elite in the 5th and 6th centuries. It marks the gradual transition from the Roman empire to the Frankish empire – and eventually the empire of Charlemagne, who converted the castellum on the Valkhof into one of his palaces.

Ulpia Noviomagus is by far the oldest and largest Roman city in the Netherlands. The population in the second century AD is estimated at 5,000 to 7,000. In the urban life, the multicultural society along the Limes reached its dynamic peak: here, different population groups, peoples and races lived and worked together. 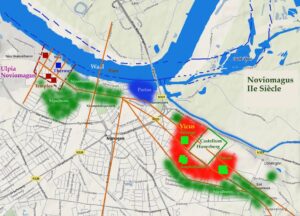 Noviomagus in the 2nd century AD. By JPh Moutschen – Own work, based on a map from the DVD: Free Software Foundation Europe, Free Layers (licensed under GFDL)., CC BY-SA 3.0.

Little is known of the city itself: less than 10% has been archaeologically investigated. For example, it is not yet clear where the western and northern boundaries were. Currently, the heart of the Roman city is being overbuilt with new housing. The remains of monumental buildings such as the forum, a temple and the public baths are located right here.

The city was probably founded around the year 70, as a successor to the burned Oppidum Batavorum. On the initiative of Emperor Traianus, the construction of the city got off to a good start. Public, monumental buildings arose, such as a forum and a large bathhouse. Around the city there were extensive burial grounds. The city of Ulpia Noviomagus existed until about 300. After that, the habitation concentrated itself around the Valkhof again.

The Hunerberg in Nijmegen-East is the only place in the Netherlands where a Roman legion had a permanent base. To make things more complicated: this happened twice in different time periods. The first time was in the time of Emperor Augustus, around 19 B.C. It probably involved two legions, about 12,000 men. After a few years Commander-in-Chief Drusus needed his legionnaires elsewhere and they left Nijmegen.

The army camp remained unoccupied for more than 80 years, until the Tenth Gemina Legion settled here. The 10th Legion had come marching from Spain in the year 70 to quell the last remnants of the Batavian Revolt. After the Batavian Revolt Emperor Vespasian left the legion behind in Nijmegen, partly to keep an eye on the Batavians, but mainly to rebuild the Lime Fortresses on the Rhine. The construction of roads and quays made it easier to supply them. Around 103 the legion left for Aquincum, today’s Budapest in Hungary.

The Romans built a fort on the Kops Plateau around 12 BC, at the same time or shortly after the legions left for the Hunerberg. The function of the fort is not entirely clear: it was too small to house large numbers of soldiers, but it did have a few monumental buildings. Most archaeologists therefore suspect a central command post of the Roman army. In the years around 30 of our era the fortress was used as a staging post for horsemen, possibly from the Ala I Batavorum, the Batavian cavalry. Thus, the fort also became part of the Limes. During the Batavian Revolt in 69-70 it was abandoned and no longer in use. Today, two-thirds of the site has been excavated, making it one of the best-researched early Roman forts in north-western Europe.

Museum Het Valkhof has an extensive collection of archaeological finds from Nijmegen and the province of Gelderland. They give a picture of human life in the region, from the Old Stone Age, Roman times, Middle Ages up to and including the 19th century.

Because of their quality and diversity, Roman archaeological finds belong to the top of Dutch cultural heritage. For four centuries, Nijmegen was the largest and most important Roman settlement in the Netherlands. The countless finds from that time show how soldiers and civilians lived here. 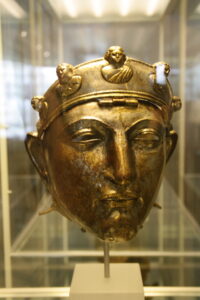 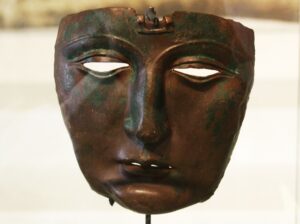 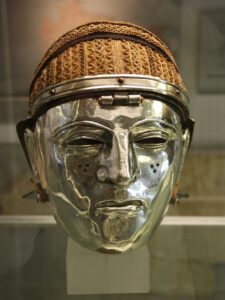 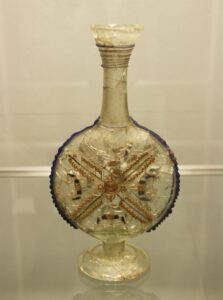 Highlights are the limestone pillar of the gods from the beginning of the era, the face helmets from the first century and many masterpieces of arts and crafts from Roman graves from the first to the fourth century. 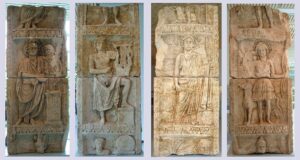 Triumphal column of TIB(e)R(ius) C(ae)SAR, comprised of at four blocks. Depicted are (from left to right): Tiberius being crowned by Victoria, whilst making a sacrifice by pouring wine onto an altar. Left. Apollo Back. Ceres Right. Diana. The figure in the Phrygian Cap is taken to be Bacchus Ca 15 AD. Found in Nijmegen, in front of the museum itself in 1980. Museum Het Valkhof, Nijmegen.  By Kleuske – Own work, CC BY-SA 3.0.

Some unique objects from the Roman period come from outside Nijmegen and the Gelderland river area: the bronze portrait head of Emperor Trajan from Xanten, the silver drinking cup (kantharos) from Stevensweert and the bronze shield knob from Blerick. 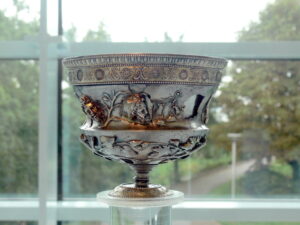 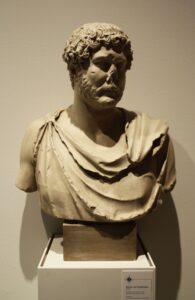 The Valkhof Museum is open until September 2022, after which it will close for a long time for renovation works. The intention is to modernise the museum and adapt it to contemporary standards such as multimedia presentations and digital applications.

Source of the featured picture: Compilation from photos taken by Carole Raddato.

🪔 This is an extremely rare nomos from Laos. In 510 BC Sybaris was destroyed by Crotone and its inhabitants flew to Laos - their river port. This migration produced a new coinage, where the bull from Sybaris coins morphed into into a man headed bull - the river god Laos. 👉

🪔 For #FrescoFriday: a fresco with a piece of smoked salmon from the Museum of Pre- and Early History, Saarbrüken. Own 📸. More photos here 👉https://bit.ly/3OzN55b

🪔 For eyes pleasure🍬: This snail-shaped glass rhyton was found in 2011 at Velika Mrdakovica in #Croatia. It was made by blowing glass into a mould with later addition of details. Only 18 such rhyta were found. It is now in the city museum of Sibenik. 📸Own pics. #RomanGlass

🪔 For eyes pleasure🍬: Bust of #Nero. Made from Paros marble, Nero is represented as teenager, with the corona civica, the crown of oak leaves. It must go back to the time of his accession on Oct. 13, 54. It is now in the Geneva' Musée d'art et d'histoire (MAH). 📸s are mine.

This is an excellent example of what the "drone archaeology" can help to discover. 🚁 Unfortunately, obtaining rights to fly over most places is not easy anymore... 🥲

Something hiding in the grass: yes, this is the Roman Fort of Iovia (Alsóheténypuszta - try to pronounce it -, Hungary) from Pannonia, Valeria. #RomanEmpire #romanarchaeology