The Xanten area and the Fürstenberg in Germany on the river Rhine retain the traces of history for thousands of years since the Stone Age. With the occupation of the Rhineland by the troops of Julius Caesar there began a new epoch of intensive settlement and cultural change. This article is about the rich history of Xanten, the wonderful Xanten Archaeological Park and the LVR-Römermuseum.

During the time of Augustus the first military fortress Vetera I was established on the Fürstenberg, strategically well placed on a high location. The fortress acted as a base for the conquest of Germany to the east of the Rhine. 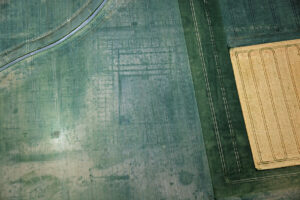 Aerial photo showing traces of the Vetera Castra I near Xanten. By Baoquan Song – Own work, CC BY-SA 4.0.

Following the defeat in the Teutoburg Forest in A.D. 9 the Rhine became the border (Limes) of the Roman Empire. The fortress was rebuilt several times and the remains of the last fortress are preserved the best, as it was built of stone. The Limes-road joined the forts on the Rhine. North of the Fürstenberg lie the remains of a harbor and a civilian settlement of the 1st century. The town was an important trading center. 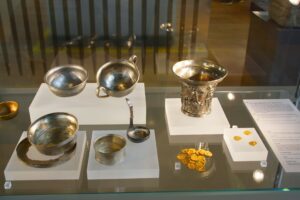 Some precious silver and golden finds from the LVR-Römermuseum in Xanten. Photo by Michel Gybels.

During the revolt of the native Batavians in A.D. 69/70 the fortress Vetera I was destroyed. The new fortress Vetera II was constructed at a new site and a legion was stationed here from 70 to at least 270. The civilian settlement was elevated to the rank of colony around 100. Emperor Trajan gave it the name Colonia Ulpia Traiana. After the Roman epoch the town crumbled. The Franks settled in the area. One of the Roman graves was revered as that of a Christian martyr. On this spot the church of Saint-Victor, the monastery and the medieval town developed, all constructed out of the stone remains of the Roman colony. 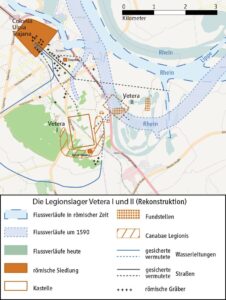 At the time of Emperor Trajan, at the beginning of the 2nd century, the Roman Empire extended from Spain to present Iraq and from Africa to Britain. Some 150 places possessed the highest civil status, they were allowed to call themselves colonies. These towns were reflections of Rome in foreign parts and the towns administered themselves, their inhabitants held Roman citizenship.

There were two colonies in the province of Lower Germany, the Colonia Claudia Ara Agrippinensium (Cologne), and the Colonia Ulpia Traiana (Xanten).

The Colonia Ulpia Traiana was a major town of the province Lower Germany. The town formed the center of an extensive tract of surrounding country. Its public buildings emphasized it as belonging to the Roman Empire. At the same time they underlined the high status of the town.

Reconstruction of Roman Xanten. By tohma – Own work, CC BY-SA 4.0.

Some 10,000 people lived within the walls on 73 ha. The inhabitants comprised romanized Gauls and Germans. With the founding of the town veterans of a relocated legion also received parcels of land. They formed an economically potent stratum of the population.

The new town received an organized infrastructure with conduit, sewers and a streetgrid. Temples, forum, an amphitheater, public baths, walls and gates were built. 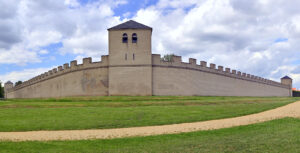 The expansion of the Franks ended the town’s period of prosperity about 276. A fortified town was erected later in its center utilizing materials of demolished buildings. It housed civilians and soldiers. At first a proportion of existing living-quarters was retained. The graves lay alongside the roads outside the town.

The crumbling town served later as a stone-quarry used for constructing the church and town of Xanten. The Roman town disappeared from the surface. Archaeological investigations are bringing them to light once again.

The Archaeological Park of Xanten offers one of the best reconstructions of the Roman cities in Europe. The excavations provide information about the architecture of the Roman town, about its ground-plan and building materials, techniques and use. Reconstruction drawings form the basis for the new building.

The town-wall, amphitheater, temple and guest-house – all the buildings within the Archaeological Park Xanten are reconstructions, not ruins. As models they recreate what has been scientifically proven and what is probable. They correspond to their Roman originals in position and size. 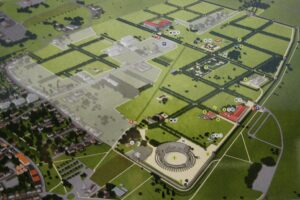 The Archeological Park Xanten with remains of the ancient city constructions. By Natyss – Own work, Public Domain.

Most of the reconstructed buildings have not been erected completely; the construction materials and techniques are, therefore, recognizable. Only the power of the observer’s imagination completes the picture.

The North Gate, a three-stores construction with open platform. The road to the north ran in the direction of the military fort of Burginatium (Altkalkar). The gate is therefore known as the Burginatium Gate. 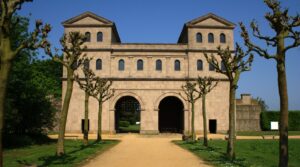 The reconstructed Burginatiumtor (Burginatiumgate) in the archaeological park in Xanten. By Andy1982 – Own work, CC BY-SA 3.0.

The Harbour Gate connected the harbour area with the town center. A major part of trade was carried out here. 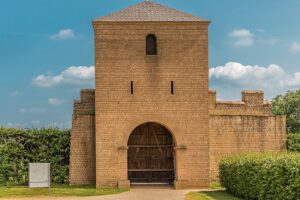 The reconstructed Harbour Gate (Hafentor) in Xanten. By Rabax63 – Own work, CC BY-SA 4.0.

An eye-catcher is the rebuilt Amphitheatre, that could offer room for 10,000 people. On public holidays popular performances of bloody animal hunts and fights to the death with gladiators drew audiences into the amphitheater. 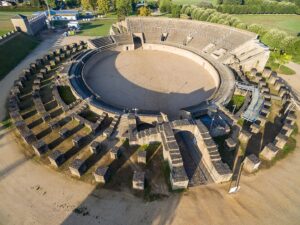 Another impressive building is the Harbour Temple. After the Capitol the Harbour Temple was the second largest temple in the town. It is not known to which deity it was dedicated. Owing to its location the excavators gave it the name of Harbour Temple. The temple towered above the town wall and the sacred precinct was surrounded by the Halls.

The documentation in the interior of the podium gives information about the temple, the construction techniques and the reconstruction, its decoration and the working of the cult. The platform displays clear remains of the temple’s superstructure. The position of large stone-blocks are visible on its surface. The blocks support the most stressed parts of the superstructure, i.e. the rows of columns, the walls of the inner sanctuary (cella) and the stairway at the southern end. Not only the exterior of the Harbour Temple was richly decorated. The cella too was adorned ornamentally. The cultroom was the place for special congregations, the everyday offerings took place at the altar in front of the temple. 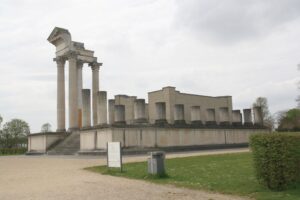 Not far from the Harbour Temple one can see the reconstruction of a Roman mill. In the Roman town numerous fragments of quern stones have been found. The flat mill is constructed of material of basalt lava which proves that the mills were imported from the Eiffel. The large mill is based upon an original from Pompeii and Ostia. The oven has also been built following classical originals in Pompeii. It is fully operational. In Roman times mainly types of wheat, especially spelt, were used for making porridge and bread. 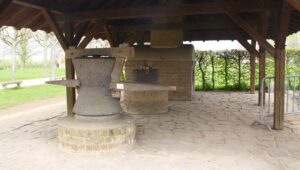 The reconstructed Guesthouse is also interesting to see. The larger rooms were perhaps rented out to travelling merchants. 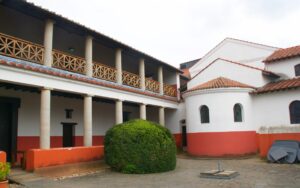 The reconstructed Roman Guesthouse in Xanten. Photo by Michel Gybels.

The corner room at the street intersection could have been a bar and snack bar. In the south wing of the building travelers could enjoy the luxury of a warm bathhouse. 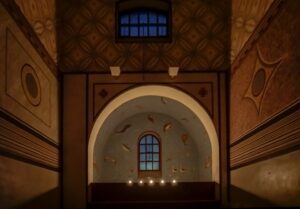 Interiors of the reconstructed Roman Baths. By Rainer Halama – Own work, CC BY-SA 4.0.

The rooms are furnished with stools, chairs, tables, cupboards and beds. 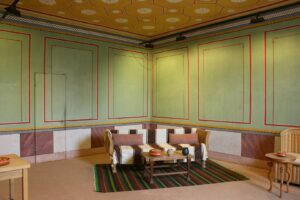 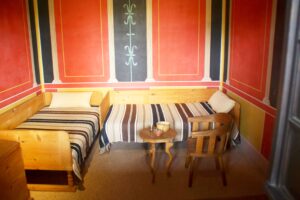 The furniture is modelled on items found in private Roman houses. The kitchen is provided with a small antechamber in which amphorae with food are stored. The fire burned on top of the stone hearth, the smoke escaped through the open window. In the south wing of the building apart from the bathhouse there are now workshops and an exhibition about Roman politics and society. There is also a garden with herbs. 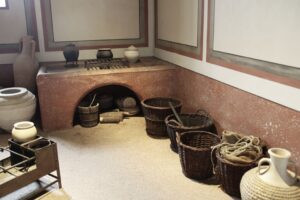 In every Roman town public baths belonged to the essential facilities. Private houses seldom possessed bathrooms. The large town baths were an everyday meeting place for the inhabitants. 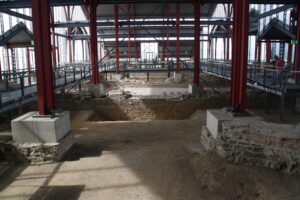 The main components for the bathing establishment are the changing room, the cold bath, the cooling-off room and the hot bath. Heating and water supply formed an effective and fully developed system. The furnaces heated the water in the large boilers and simultaneously the underfloor and wall heating. The wastewater from the bath flushed the latrine via a circulatory drain. Typical for bathhouses is the diversity of the roofs, a result of the profusion of differing constructional parts. Remnants of wall paneling of porphyry prove the high value of the materials employed. The mortar prints in a floor show the traces of a pattern of black and white limestone tiles. The colored stone tiles and the metal fittings were prized out and used elsewhere in the following centuries. 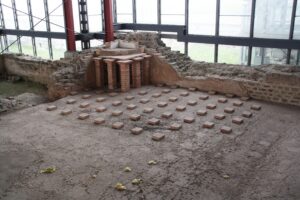 Finds of instruments for personal hygiene, of games, but also of surgical instruments bear witness to everyday life in the baths. The town baths of Xanten are one of the best preserved in whole Germany. 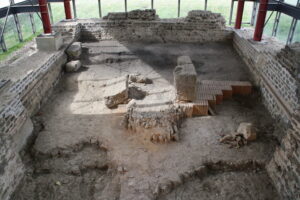 Excavations have been taking place for centuries in the Roman town and legionary camps near Xanten. Since 2008 the archaeological finds recovered from these have had a new home: the LVR-Römer Museum in the Archaeological Park. 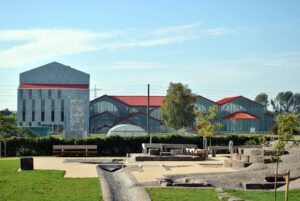 The Römermuseum in the Archäologischen Park Xanten. By Hartmann Linge – Own work, CC BY-SA 3.0.

The huge and wonderful museum, erected over the original foundations of the main town baths, allows us to visualize the dimensions of the Roman architecture. Its external shape replicates that of the monumental ancient hall, which used to give entry to the bathing rooms.

The interior of the museum also gives us an idea of the impressive size of the Roman building. The exhibits are displayed on freely hanging ramps and floors, offering surprising perspectives at every turn. 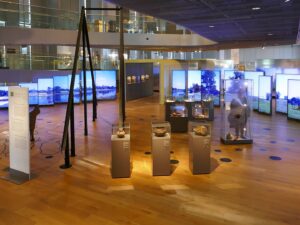 Visitors are taken on a time tour through the eventful Roman history of Xanten. They meet the first legionnaires, who arrived shortly before the birth of Christ and who were witness to the rise and fall of the Colonia Ulpia Traiana. 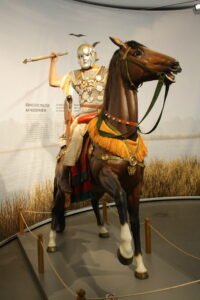 Over 2,500 exhibits and modern media draw a vivid picture of everyday Roman life in Germany. 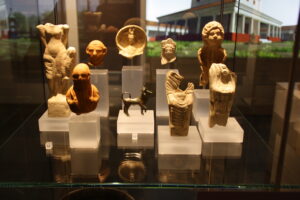 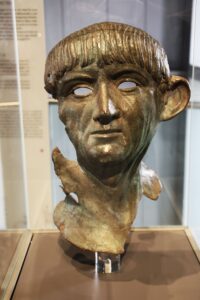 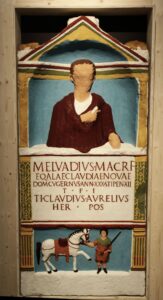 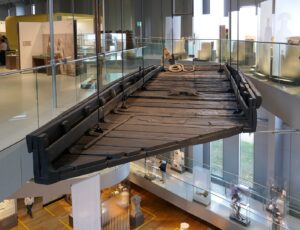 Throughout the museum there are special eye-catchers and hands-on exhibits which appeal to children. 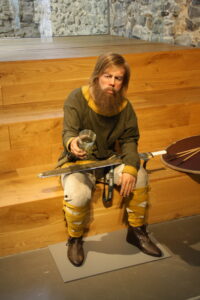 The LVR-Archaeological Park and Museum Xanten has been established for the public at large. Its development will be influenced by their interests, knowledge and needs just as scientific questions and research results dictate its appearance.

Source: Guide through the LVR-Archaeological Park Xanten by Anita Rieche