On the traces of the Via Belgica: Maastricht – Heerlen – Tongres – Liège

The Roman road between Boulogne-sur-Mer (France) and Cologne (Germany) is nowadays called Via Belgica. However, it was never known by this name in Roman times. The name appeared in the early 20th century as archaeologists were trying to reconstruct the Roman road system in the province of Germania Inferior. The construction of this road is generally credited to Marcus Agrippa, who was then governor in Gallia (20-19 BC). The purpose of the road was to connect the new territories in the North to the rest of the empire. Then, in the 2nd century AD its role became even more important, as it led through rich soils where large quantities of cereals were produced for both the military and civilian markets.

This transportation axis between the Rhine and Meuse passed through various towns that were all founded under Augustus. In this article we will provide a guide to three of them: Maastricht (Traiectum ad Mosam), Heerlen, and Tongres (Atuatuca Tungrorum). We also provide a short description of Roman remains found in Liège (which depended from the Civitas Tungrorum), now part of the Archéoforum under the square Saint-Lambert.

Illustration of the Via Belgica from the “Roman bathing in Coriovallum – The thermae of Heerlen revisited” by K. Jeneson and W.K. Vos (eds.), 2020.

As many other sites on the Via Belgica, Maastricht owes its existence to this military road, which crossed the Meuse to the north of the Ardennes massif where the valley sides are gentler. The site emerged at the confluence of the river Jeker, on the west bank, and the river Geul, on the east bank, with the river Meuse.

There are no known ancient sources which relate to the ancient Maastricht, excepting a mention in the Historiae, written by Tacitus, at the beginning of the 2nd century AD. It concerns the Roman general Labeo who held the bridge across the Meuse – pons mosae fluminis – during the Batavian uprising (69-70 AD), whilst Julius Civilis together with his allies, marching from Cologne in a westerly direction, attempted to seize it. It is the oldest known account of a battle for the Meuse crossing. The town’s Latin name – Traiectum ad Mosam (Crossing on the Meuse) – first occurs in the Middle Ages. 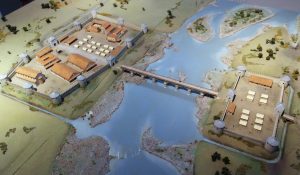 Reconstruction of the late Roman Maastricht. By Kleon3 – Own work, CC BY-SA 4.0.

Maastricht was possibly a stronghold, but there was also a sanctuary at the mouth of the Jeker, as attested by archaeological finds under the present site of the cloister of the church of Our Lady (Onze Lieve Vrouwe). This sanctuary, a bath-house and some incomplete residential houses are the only Roman buildings which have been excavated as yet. It seems that a large part of the settlement was destroyed around 270 AD. Later, a smaller fort (170 metres long by 90 metres wide) was rebuilt in the second quarter of the 4th century on the west bank of the river Meuse.

Maastricht keeps little remains of its Roman past. For example the Op de Thermen courtyard keeps no traces of the ancient Thermae – all remains are hidden underneath the surrounding buildings. 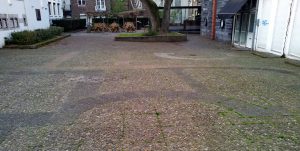 Contours of a Roman bath house in the pavement of Op de Thermen square. By Kleon3 – Own work, CC BY-SA 4.0. 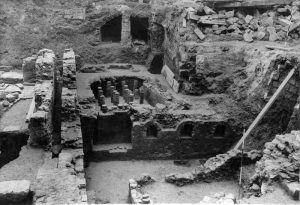 The best-preserved Roman traces of Maastricht can be found in the Derlon Museum Cellar (Museumkelder Derlon), located on Onze Lieve Vrouweplein square. The place is unique: the Roman were preserved thanks to massive reconstruction works in 1983-85, which unearthed remains of a Roman sanctuary, including a walled square with a Jupiter Column. These finds attested that the area belonged to one of the central estates of the former Roman vicus. 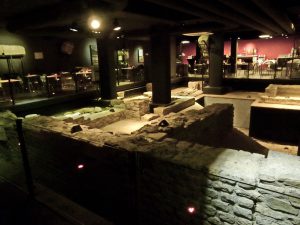 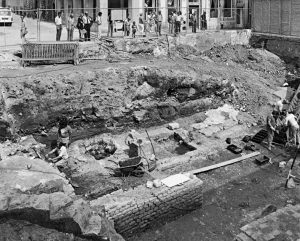 Excavations at the site of Derlon Museum in 1983. By Rijksdienst voor het Cultureel Erfgoed, CC BY-SA 4.0.

Coriovallum emerged during the Augustan period at the crossroads of two important Roman roads. The first is Via Belgica, and it linked the border region along the Rhine with the hinterland in Gaul; the second ran from Aquae Granni (Aachen) in the south, along the right bank of the Meuse, to the large legionary camp of Vetera in Xanten to the north. Coriovallum was thus directly linked to the two coloniae later established on the Rhine: Colonia Claudia Ara Agrippinensium (Cologne) and Colonia Ulpia Traiana (Xanten). 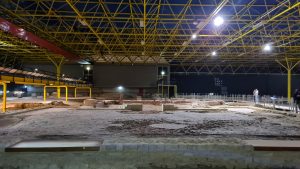 Coriovallum was built in order to defend the strategic location and serve as a base of operations for military companies and supply chains. Funerary offerings found by archeologists in the area prove that Coriovallum had his share of rich families, making it more than just a minor town, and this is attested by the existence of a bath house built after 50 AD. 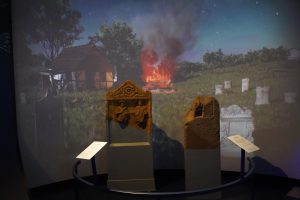 Visual reconstruction of the Gallo-roman settlement at Heerlen. Source: TimeTravelRome. Link to the full album.

The first bathhouse consisted of a main building with four bathing rooms (apodyterium, frigidarium, tepidarium and caldarium) in a row and a fifth adjacent circular room (the laconicum) to the west. All the heated rooms shared a single heating system. The apodyterium was so large that people probably also exercised there. The bathhouse was later expanded in the late Flavian or Trajanic period, and a surrounding wall was built creating a complex four times larger than the original site, at around 2000 m2. The bathhouse existed for at least a century and a half in its extended form. 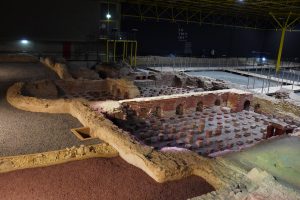 View on the hypocaust of the Baths. Source: TimeTravelRome. Link to the full album.

The whole area is thoroughly excavated and makes part of the wonderful Thermenmuseum. The museum offers some useful digital and 3D reconstructions and hosts many archaeological finds, including very well preserved Gallo-roman kiln. 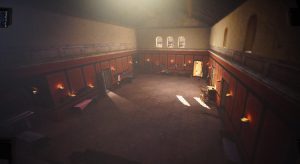 Reconstruction of the Bath’s interiors. Source: TimeTravelRome. Link to the full album. 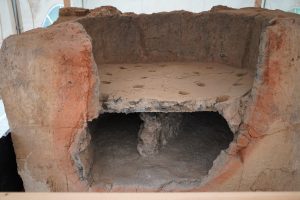 Some 15 kilometres distance to the west of Maastricht is the town of Tongeren – Atuatuca Tungrorum. Occupying a hilltop overlooking the surrounding countryside, Atuatuca was originally a fortress belonging to a tribe of the same name. During the Roman conquest of the area, Julius Caesar established a winter camp on the hilltop, only for his legionaries to be massacred there by the Eburones under their leader Amborix in 54 BC. This was the most severe defeat suffered by the Roman legions during the entire conquest of Gaul.

Reconstruction of the Atuatuca Tungrorumin the Gallo-roman museum of the city. Source: TimeTravelRome. Link to the full album with Tongeren pics.

Caesar then wiped out the Eburones and Augustus subsequently handed the territory over to the Germanic Tungri tribe. There was a continuing military presence at the fort, which led to the growth of a civilian settlement alongside. Tongeren became an impressive town with walls of the 2nd century up to 4500 metres in length, though reduced to 2800 metres in the 4th century. 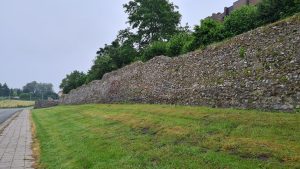 The city became an important commercial center, sending supplies to the frontier on the Rhine, and it continued to prosper even after the military withdrew. The exact location of the forum is still uncertain, but remains – or rather a geometrical reconstruction – of a large temple dating to the late first century AD can be visited. 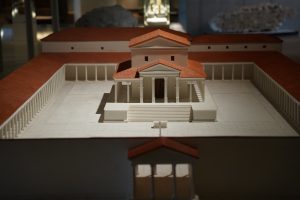 Reconstruction of the temple of Tongeren in the Gallo-Roman museum. Source: TimeTravelRome. Link to the full album with Tongeren pics.

A statue of Amborix – leader of Eburones – stands in the centre of the modern city, and substantial stretches of the Roman walls have survived to the north and west. 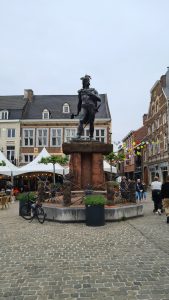 Amborix statue in the center of Tongren. Source: TimeTravelRome. Link to the full album with Tongeren pics.

Finds from the Roman period are displayed in the excellent Gallo-Roman Museum of Tongres.

The Gallo-Romeins Museum of Tongeren was established in 1954 and received its modern building in 1994. The wonderful permanent exhibition starts with the Neanderthals, but the major part is dedicated to the Gallo-Roman culture until the beginning of the Christianity. 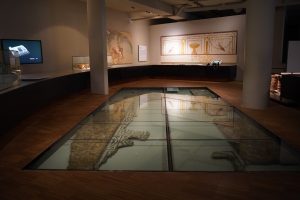 Museum room with a mosaic floor and frescoes. Source: TimeTravelRome. Link to the full album. 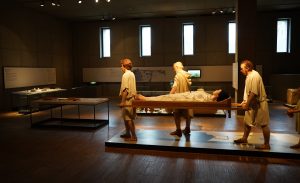 Reconstruction of a Gallo-roman funerary scene. Source: TimeTravelRome. Link to the full album. 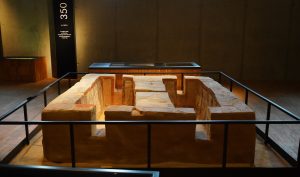 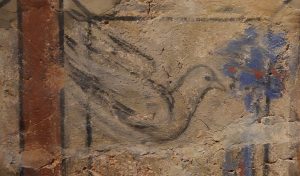 The painting on the grave wall. The dove possibly refers to a Christian motif. Source: TimeTravelRome. Link to the full album.

Reconstruction of the Tongeren necropolis in 150 AD. Source: TimeTravelRome. Link to the full album.

Recently, the Museum hosted an exhibition called “Face to face with the Romans” (Oog in oog met de Romeinen). This excellent exhibition was dedicated to Romans themselves: young and old, rich and poor, and it was wonderfully illustrated by some 250 pieces from the British Museum. You can find a detailed TimeTravelRome photo album from this exhibition following this link. 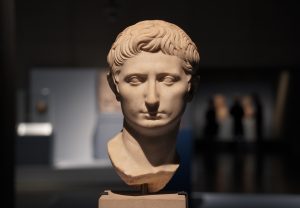 Sculpted head of the future Emperor Augustus Marble 43-31 BC Rome. Seen at the “Face to face with the Romans” exhibition. Source: TimeTravelRome. Link to the full album with exhibition pics. 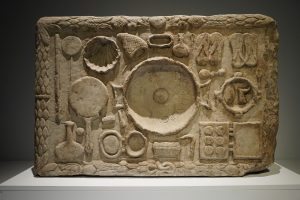 Votive marble panel dedicated by the priestess Claudia Ageta to the goddess Demeter Around 170 AD. Seen at the “Face to face with the Romans” exhibition. Source: TimeTravelRome. Link to the full album with exhibition pics.

Depending on the City of Tongres, at the beginning of its Roman period of history, Liège had just a few buildings located on the left bank of the river. It was a villa and it included barns, attics, workshops and stables. In the center, there was an imposing residential building 54 m long by 35 m wide – the only one that has been found to date. It was abandoned in the 4th century and reoccupied again in the 6-7th centuries. Remains of the villa and of the Baths’ hypocacaust can be seen in the Archéoforum of Liège – a large underground archaeological exhibition located under the square Saint-Lambert. 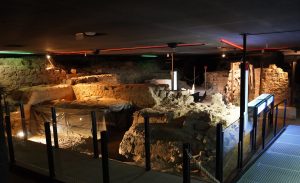 Ancient archaeological remain in the Archéoforum of Liège. Source : TimeTravelRome. Link to the full album.

The Roman building in the Place Saint-Lambert was likely integrated into the Civitas Tungrorum traffic network. The site has a natural access route to the plateau (the Légia) and is located 4 km upstream from the river crossing via the Tongeren-Trier route. It is possible that the Roman villa under the square Saint-Lambert belonged to a rich vineyard owner or a trader, whose prosperity was related to the proximity of the Via Belgica. 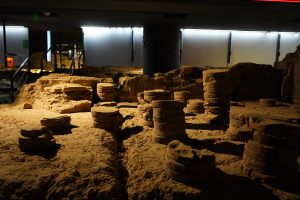 Via Belgica on the TimeTravelRome mobile app

TimeTravelRome mobile app offer a unique feature: it maps all Roman roads. For all most important roads (they appear in green) their name can also be displayed – one has juste to click on the road. All major cities on the Via Belgica, as well as other Roman Roads are featured in the app and a description of all main sites is provided. 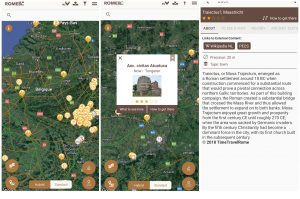