The Gallo-Roman Site and Museum of Bavay (Bagacum) in France

Not far from the Belgian border, in the north of France, is the Gallo-Roman site and museum of Bavay – ancient Bagacum (from the Celtic word for ‘beech’). The city was probably founded at the end of the 1st century BC. Situated at a strategic crossroads, it grew to become one of the largest and most important Roman settlements in the Belgica province of Gaul. Excavations have uncovered substantial remains of the Roman city. These include a double forum, a variety of public and private buildings, and thermal baths, fed by aqueducts. An impressive array of archaeological finds from the city, including bronzes and a great deal of pottery, can be seen in the Ancient Forum of Bavay museum.

The People of the Nervii and the Roman Occupation

The people of the Nervii, of which Bagacum (Bavay) was the main town at the time of the Roman period, were not known before the occupation of Gaul by Julius Caesar from 58 to 51 BC. Moreover, the most important source of information about the Nervii is the account of the Gallic Wars by Caesar himself at the time of independence. Before the capture of Gaul, the Nervii occupied the region between the Scheldt, the Sambre and the Meuse and were known as barbarians who fought against the Roman legions at the battle of Sabis in 57 BC and at the attack on the camp of Quintus Cicero (brother of the famous orator) in 54 BC. 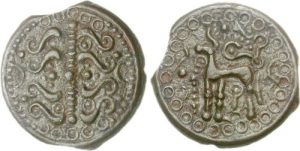 Northeast Gaul. Nervii. Circa 100-50 BC. Potin. Obverse: Central staff of pellets with four wavy lines on either side. Reverse: Celticized stag or horse standing left; ornaments around. Source: www.cngcoins.com Used by permission of CNG.

At that time the Nervii did not live in what would now be called cities, but in oppida or fortified settlements that were surrounded with walls made of earth and wood. About twenty kilometres south of Bavay lies Avesnelles-Flaumont which is considered to be the primitive capital of the Nervii before Bavay was founded.

Archaeological research on the Bavay site has shown that the place was inhabited almost certainly only after the occupation of Gaul by Caesar. The uprising of Bavay, after the occupation, was a result of the reorganization of the area by Emperor Augustus, between 16 and 13 BC. Gaul, conquered by Julius Caesar, was thus divided into three provinces. The region situated between the Seine and the Rhine became Gallia Belgica with Reims (Durocortorum) as its capital. This region was in turn divided into civitates, administrative descriptions with an overarching capital. Most of the civitas of the Nervii were located on present-day Belgian territory. Their territory was enclosed by the tribes of the Menapians to the north, by the Atrebates to the west, by the Ambians and Viromanduers to the south and by the Tongres to the east. The choice to make Bavay the capital of the Nervii was dictated by its strategic location. It was an important junction of roads leading to Trier via Maubeuge, to Reims via Avesnes, to Amiens via Vermand, to Boulogne via Arras or Cambrai and to Cologne via Maastricht and Tongeren. Many of today’s modern roads still follow the tracks of those old connecting roads.

Screen capture from the TimeTravelRome mobile app showing Bavay at the crossroad of important Roman Roads.

In the ancient world, the road that linked Boulogne to Cologne was particularly important and was built at the beginning of the reign of Emperor Augustus (27 BC to 14 AD). This road enabled Roman troops to move quickly and easy towards the Rhine and the armies that were in Germania.

The beginning of the Roman city was very modest. On the site of the present museum there were houses built in perishable material, wells and storage places for manure. On the site of the present college there were artisanal workshops. However, an inscription in honour of Emperor Tiberius, who visited the city between the years 4 and 7 of our era, shows that Bavay was not an ordinary place. That inscription, which unfortunately was destroyed during the Second World War in 1944, read as follows: TI(BERIO) CAESARI AVGVSTI F(ILIO)/DIVI NEPOTI ADVENTV/EIVS SACRVM/CN LICINIVS C(AII) F(ILIUS) VOL(TINIA) NAVOS. Translated: Tiberius Caesar, son of Caesar Augustus, grandson of the divine Caesar, on the occasion of his visit/arrival, Cnaeus Licinius Navos, son of Caius Licinius, of the tribe of the Voltinia, has dedicated this monument to him. 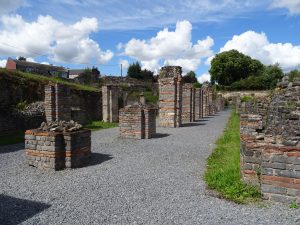 There lived important Roman citizens and for more than three centuries Bagacum was the political capital of the Nervii. The names of some important magistrates are known: Tiberius Julius Tiberinus, duumvir or the most important magistrate within the city, Lucius Osidius, priest of Rome and of Augustus in Lyon and Marcus Pompey Victor, questor of the Roman citizens. This role of political capital explains at the same time the presence of a monumental centre in the city, the famous forum. 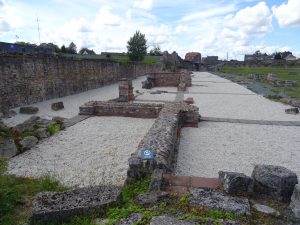 At the end of the 3rd and beginning of the 4th century AD, under the impetus of Emperor Diocletian (284-305), Bavay lost its status as the capital to Cambrai. Whether Bavay was affected by the invasions in the north of Gaul at the end of the 4th and 5th centuries is not clear. The ancient forum was nevertheless walled with an impressive wall whose interpretation remains delicate. During archaeological research, traces of fires were discovered in several places, which could indicate that the city was burnt. Apparently, however, the town was not abandoned because traces of numerous private houses were discovered on the site of the ancient forum and also the cryptoporticoes, which remained in use at least until the 5th century.

It was only in 1906 that archaeological research in Bavay got off to a good start thanks to the efforts of Maurice Hénault, archivist of the Valenciennes Library. This man was active on the site for about 30 years and in 1923 he even published the journal Pro Nervia in which an account of his research was published until 1934. In 1936, he was succeeded by Henri Biévelet, who started the major excavations on the site in 1942 and continued until 1976. This research uncovered most of the cryptoporticoes and the esplanade around the civil basilica. After 1976, the work was continued by Jean-Claude Carmelez, curator of the Bavay Archaeological Museum. And in 1988/1989, the Bavay site was then recognised as one of the thirty French national sites entitled to further research, which is done now by the Centre for Archaeological Studies of the University of Lille. 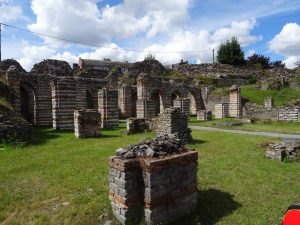 The best preserved remains consist of the impressive porticoes, the south-facing terrace with the remains of several shops, the cryptoporticoes, the central square of the forum, the remains of the civil basilica, the habitat area to the south of the forum and the rampart from the Late Imperial period. In total, the archaeological site covers more than 40 hectares, which is quite modest compared to those of Amiens (150 hectares) and Trier (more than 200 hectares). 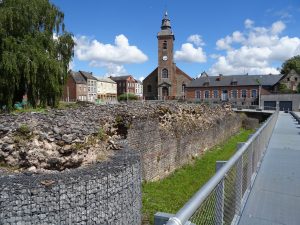 In the recently new archaeological museum, numerous excavated objects have been brought together in nicely arranged showcases. Of particular interest here are the beautifully preserved bronze statuettes, which bear witness to an exceptionally high level of craftsmanship. Also on display are pottery, remnants of weapons, coins and all kinds of everyday utensils. 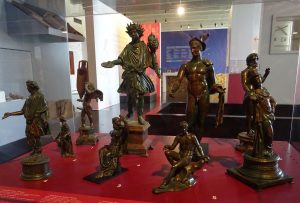 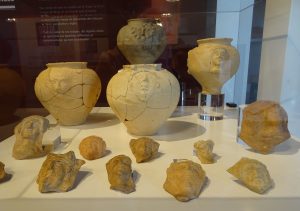 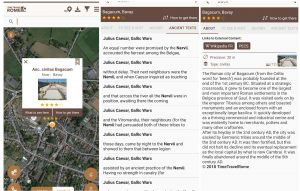 Source of the featured image: By Jean-Pol GRANDMONT – Own work, CC BY-SA 3.0.