Occupying a strategic position at the confluence of the rivers Moselle and Seille, Metz was founded as a Celtic hillfort belonging to the Mediomatrici tribe. Later the city was located on a crossroads of important Roman roads going from Lyon to Trier and from Reims to Strasbourg. As Divodurum Mediomatricorum, it grew into an important city with at its peak a population estimated at around 40,000 people.

In the third century, in fear of invasions from outside cultures, the city was enclosed – and substantially reduced – by a fortifying wall. It fell to German invaders in the fifth century AD but remained a significant urban center. As the centuries passed, Metz became the home of kings and was even recognized as its own republic from the twelfth to fifteenth centuries.

Various traces of the city’s Roman past have been identified by archaeologists. These include remains of baths (now part of the “Cour d’Or” Museum), an amphitheatre, and a fourth-century gymnasium or school, now the basilica of Saint-Pierre-aux-Nonnains. Not very far from the city one can find well preserved and beautifully restored remains of the Roman aqueduct which crossed the Moselle over an impressive 1.1 km bridge.

Certainly less spectacular than the neighboring city of Trier, this collection of ancient monuments still makes Metz a must-see for any fan of Roman history.

The population of Divodurum Mediomatricorum numbered up to 40,000 people, so it is no wonder that the city had several bathing establishments – it is believed that their number was three or four. Obviously, the baths as well as other needs of the big city required a large amount of water. This was carried out by an aqueduct, part of which – that which crosses the Moselle – represented a jewel of Roman architectural engineering.

Reconstruction of the aqueduct bridge connecting the two banks of the Moselle. Photo taken on one of the information boards on the site. Source: Timetravelrome.

The water for Metz baths was supplied with water from the south of Mount Saint-Belin, near the village of Gorze. This water was renowned for its purity: modern authorities still use this terrain called Bouillons to extract water.  The aqueduct was 22 km long, but only 1.125 m were above ground – the rest of the route was underground. The map below shows the exact route of the aqueduct. 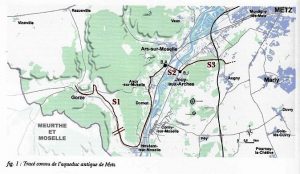 The map with the trajectory of the Aqueduct. Source: link.

Another view of the Aqueduct in Ars-sur-Moselle. Source: Timetravelrome (Flickr album). License: Creative Commons BY 2.0.

Note that the aqueduct has undergone a deep restoration. The next photo taken from the information board on the site shows its original state. 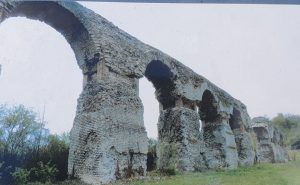 The remains of the aqueduct visible in Ars-sur-Moselle allow you to observe a trick of Roman engineers: the water was divided into two channels, which made it possible to regulate its flow during periods of frost and in the fall when falling leaves obstructed the flow of water. This double channel structure was also useful during repairs carried out to the aqueducts.

The basin at Ars-sur-Moselle. Source: Timetravelrome. License: Creative Commons BY 2.0.

The remains of the aqueduct on the other side of Moselle at Jouy-aux-Arches are are no less beautiful.

The opposite view of the aqueduct in Jouy-aux-Arches. One can clearly see the two channels of the Aqueduct. Source: Timetravelrome (Flickr album). License: Creative Commons BY 2.0.

In addition, in good weather, it is possible to enjoy a beautiful walk along the Moselle admiring the Roman remains.

Finally, for true history buffs, there is a very small part of the underground aqueduct that is visible – at least for those who drive on the D12 departmental road.

As we have already mentioned, most likely, four different thermal establishments existed in Metz. The largest and most opulent was located on the Colline Sainte-Croix, the heart of the ancient city. Today it is where the Cour d’Or Museum is located. Part of the Roman baths can be seen inside the museum – discovered in 1934, they are presented in-situ. 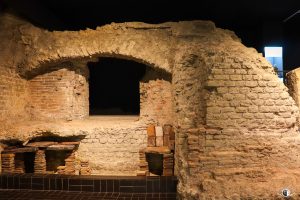 Hypocaust of the baths, preserved in the museum. Source: Alan B, licensed under CC BY 2.0.

It is interesting that these Roman baths were different compared to many others: they did not have large basins, but they had instead large tubs used simultaneously by five to six people. Tubs had different shapes and were made from different materials such as granite, marble or red porphyry. One tub from this Bath is still preserved in the Cathedral of Metz: it was possibly produced in Egypt around the 4th century and was used since the Middle Ages as baptismal fonts. 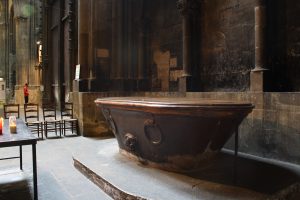 Traces of two other Roman baths were found in Metz: the Saint-Jacques baths and baths on rue Poncelet. Unfortunately, there are no visible remains of them today.

There were two amphitheatres in Metz but not simultaneously, as the second (the small one) was probably built by reusing the masonry of the first. This first one has unfortunately disappeared but it still definitely deserves a few words: with its 25,000 seats, the big Divodorum Amphitheater was one of the largest in the Roman world. The structure measured 148 meters in length by 124 meters in width and 35 meters in height. It was much larger than the only two surviving Amphitheaters in France – in Nîmes and Arles. The amphitheater was huge in Ancient times but it was gradually destroyed by the pillaging of stones which were used for the construction of the wall and other buildings in the city. The remains of the Amphitheater were found in 1902, during the work undertaken for the construction of the current Metz station. Some elements of the structure are exhibited today in the museums of Metz. 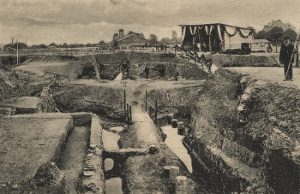 Discovery of the Amphitheater of Metz during the excavations of 1902-1903. Source: metzavant.blogspot.com

Unfortunately, nothing can be seen of this first monumental first amphitheater as its remains were buried under the crossroads in front of the Center Pompidou-Metz. Some information about most recent excavations in 2007 can be found at the INRAP site here and here.

Of more modest size, the second amphitheater of Metz was located within the fortifications of the city. It was oval-shaped and had just one side of seats, making it similar to an Odeon. It could accommodate some 6,000 spectators. Its construction can be dated between the 2nd and 4th century. The location of this amphitheater can still be seen thanks to the semicircular structure or oval structure of the buildings built above its ruins. One can see that it was located between the rue Sainte Marie, rue du Faisan and the quai Paul Vautrin, on the site of the former abbey Sainte Marie. 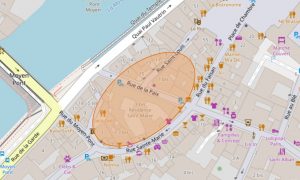 Today, the basements of several buildings keep the remains of this Roman amphitheater and it is possible to visit them. The LogiEst residence, for example, offers tours of its Roman cellars every year during heritage days. 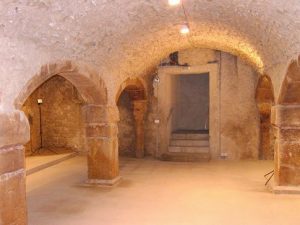 The vaults of the small Amphitheater of Metz. Source: metzavant.blogspot.com

Metz is rich in vestiges of the Medieval period and later, but the remains of Roman fortifications are scarce. However, there are three places where these can be fund: in a courtyard in rue des Piques, in the wall of Saint-Martin church and behind houses in Place Saint-Louis.

The photo shows the church of Saint-Martin: on either side of the entrance gate there is a wall of Roman origin. 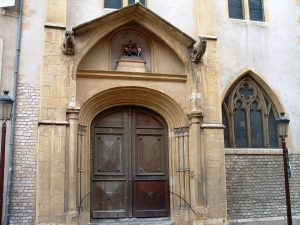 Remains of the Gallo-Roman wall on either side of the church portal. Par MOSSOT — Travail personnel, CC BY 3.0.

The picturesque Saint-Louis Square was built on the ancient defensive walls of Roman Divodurum. You can see the remains of a tower above the roofs of the buildings in the square.

Other Remains and Sources

The city of Divodurum had several necropolises, outside the city walls. The largest are those of Pontiffroy to the north of the city, Sablon to the south and that of Horgne. Metz also had many temples and religious places like the Niseum… The crypto portico of the Place d’Armes at the foot of the Saint -Etienne cathedral is another place of interest.

Unfortunately all of these places are either impossible to visit or are hidden from view. However, we recommend to any visitor or curious reader this magnificent source, which illustrates very well practically all the archaeological excavations in Metz. This is the 2nd volume of a thesis by a student from the University of Lorraine Julien Trapp. His thesis was entitled “The archaeology in Metz. Institutions, practices and results. From the work of Keune to preventive archaeology 1896-2008”. This second volume (link to the PDF document is here) is a source of illustrations for his thesis – one finds there everything that a passionate enthusiast will want to see and know about Metz of the Romans – Divodurum Mediomatricorum.

Article about the Cryptoporticus (FR): https://www.republicain-lorrain.fr/edition-de-metz-ville/2015/08/19/metz-les-dessous-caches-de-l-eveche