The Archaeological Site of Paestum

Paestum was a major ancient Greek city on the coast of the Tyrrhenian Sea in Magna Graecia (southern Italy). The ruins of Paestum are famous for their three ancient Greek temples in the Doric order, dating from about 550 to 450 BC, which are in an excellent state of preservation. The city walls and amphitheater are largely intact, and the bottom of the walls of many other structures remain, as well as paved roads. The site is open to the public, and there is a modern national museum within it, which also contains the finds from the associated Greek site of Foce del Sele. 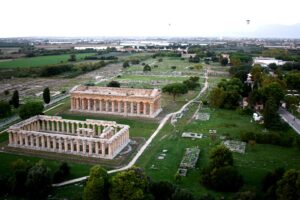 Solinus wrote that it was established by Dorians. After its foundation by Greek colonists under the name of Poseidonia (Ancient Greek: Ποσειδωνία), it was eventually conquered by the local Lucanians and later the Romans. The Lucanians renamed it to Paistos and the Romans gave the city its current name. As Pesto or Paestum, the town became a bishopric (now only titular), but it was abandoned in the Early Middle Ages, and left undisturbed and largely forgotten until the eighteenth century. 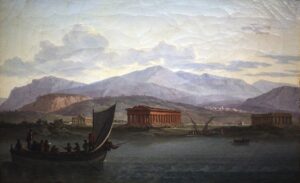 Much of the most celebrated features of the site today are the three large temples in the Archaic version of the Greek Doric order, dating from about 550 to 450 BC. All are typical of the period, with massive colonnades having a very pronounced entasis (widening as they go down), and very wide capitals resembling upturned mushrooms. Above the columns, only the second Temple of Hera retains most of its entablature, the other two having only the architrave in place. 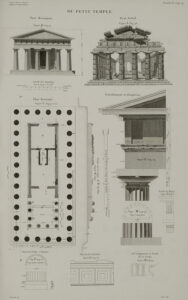 These were dedicated to Hera and Athena (Juno and Minerva to the Romans), although previously they often have been identified otherwise, following eighteenth-century arguments.

Hera I and Hera II (Poseidon) temples. By Magistermercator – Own work, CC BY-SA 3.0.

The two temples of Hera are right next to each other, while the Temple of Athena is on the other side of the town center. There were other temples, both Greek and Roman, which are far less well preserved. 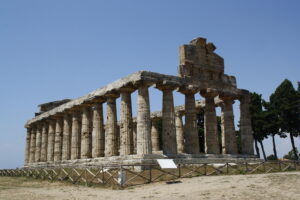 Paestum is far from any sources of good marble. Unsurprisingly, the three main temples had few stone reliefs, perhaps using painting instead. Painted terracotta was used for some detailed parts of the structure. The large pieces of terracotta that have survived are in the museum.

The whole ancient city of Paestum covered an area of approximately 120 hectares. Only the 25 hectares that contain the three main temples and the other main buildings have been excavated. The other 95 hectares remain on private land and have not been studied.

The ancient city was surrounded by defensive walls, which are largely intact. The walls are approximately 4.75 km long in its polygonal perimeter, typically 15 m high, and 5–7 m thick. 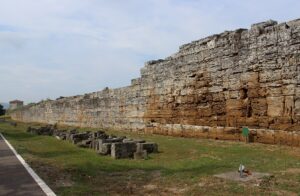 Corresponding with the cardinal points, there were four main openings in the wall: Porta Sirena (east to the hills); Porta Giustizia (south, now to the modern village of Paestum); Porta Marina (west to the sea); and Porta Aurea (north), which was later destroyed. Positioned along the wall were 24 square or round towers. There may have been as many as 28, but some of them (and Porta Aurea) were destroyed during the construction of a highway during the 18th century that effectively cut the ancient site in two.

The central area is completely clear of modern buildings and always has been largely so, since the Middle Ages. Although much stone has been stripped from the site, large numbers of buildings remain detectable by their footings or the lower parts of their walls, and the main roads remain paved. A low-built heroon or shrine memorial to an unknown local hero survived intact; the contents are in the museum. Numerous tombs have been excavated outside the walls.

Three Greek Temples and Other Monuments

The first Temple of Hera, built around 550 BC by the Greek colonists, is the oldest surviving temple in Paestum and the one furthest south. 18th-century archaeologists named it “the Basilica” because some mistakenly believed it to be a Roman building. (The original Roman basilica was essentially a civic form of building, before the basilica plan was adopted by the Early Christians for churches.)

Inscriptions and terracotta statuettes revealed that the goddess worshiped here was Hera. Later, an altar was unearthed in front of the temple, in the open-air site usual for a Greek altar. The faithful could attend rites and sacrifices without entering the cella or inner sanctuary.

In the central part of the complex is the Roman Forum, thought to have been built on the site of the preceding Greek agora. On the north side of the forum is a small Roman temple, dated to 200 BC. It was dedicated to the Capitoline Triad, Jupiter, Juno and Minerva. 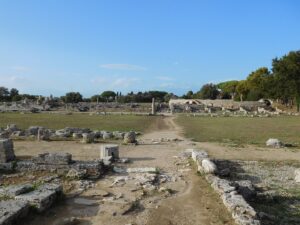 The Roman Forum of Paestum. By Superchilum – Own work, CC BY-SA 4.0.

To the north-east of the forum is the amphitheater. This is of usual Roman pattern, although much smaller than later examples. 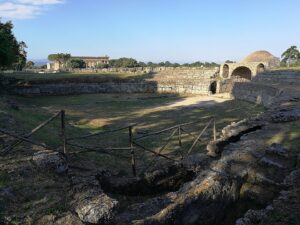 Amphitheater of Paestum. By Lucamato – Own work, CC BY-SA 4.0.

Only the western half is visible; in 1930 AD, a road was built across the site, burying the eastern half. It is said by local inhabitants that the civil engineer responsible was tried, convicted and received a prison sentence for what was described as wanton destruction of a historic site. 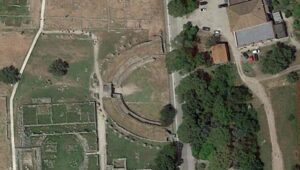 Aerial photo of the Paestum Amphitheater cut in two by the road. Source : Google Maps.

There is also a small circular council hall (bouleuterion) or assembly space (ekklesiasterion), with seats in tiers. It was probably never roofed, but had a wall around it, perhaps with a small arcade round the inside. This ceased to have a role in Roman times and was filled over. 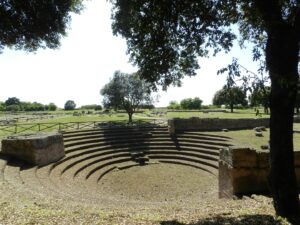 The ekklesiasterion. By Costaetrusca (Roberto Baroni) – Own work, CC BY-SA 4.0.

The heroon, close to the forum and the Temple of Athena, probably celebrated the founder of the city, though constructed around a century after the death of this unnamed figure. It was a low tumulus with a walled rectangular enclosure faced with large stones around it. When it was excavated in 1954 a low stone chamber with a pitched roof was discovered at the center, half below the surrounding ground level and half above. This contained several large, rare, and splendid bronze vessels, perhaps not locally-made, and a large Athenian pottery black-figure amphora of about 520–500 BC. The bronze vessels had traces of honey inside. These are all now in the museum. 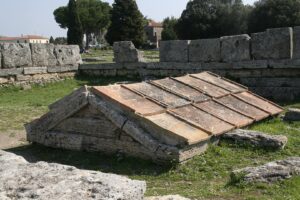 Heroon of Paestum. By Domenicomarconi – Own work, CC BY-SA 4.0.

Just south of the city walls, at a site still called Santa Venera, a series of small terracotta offertory molded statuettes of a standing nude woman wearing the polos headdress of Anatolian and Syrian goddesses, which were dated to the first half of the sixth century BC, were found in the sanctuary. Other similar ones have been excavated at other Paestum sanctuaries during excavations in the 1980s. The figure is highly unusual in the Western Mediterranean. 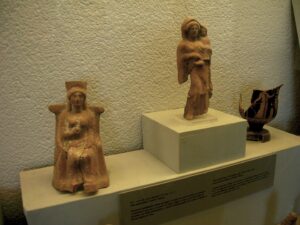 Statuettes from Santa Venera. By Mentnafunangann – Own work, CC BY-SA 3.0.

The Second Tempe of Hera

The second Temple of Hera was built around 460–450 BC, just north of the first Hera Temple. It was once mistakenly thought to be dedicated to Poseidon. Instead of the typical 20 flutes on each column, they have 24 flutes. The Temple of Hera II also has a wider column size and smaller intervals between columns. The temple was also used to worship Zeus and another deity, whose identity is unknown. 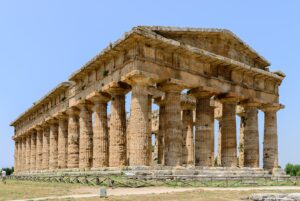 There are visible on the east side the remains of two altars, one large and one smaller. The smaller one is a Roman addition, built when a road leading to a Roman forum was cut through the larger one. It also is possible that the temple originally was dedicated to both Hera and Poseidon; some offertory statues found around the larger altar are thought to demonstrate this identification. 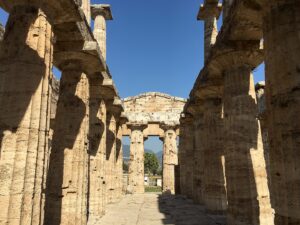 On the highest point of the town, some way from the Hera Temples and north of the center of the ancient settlement, is the Temple of Athena. It was built around 500 BC, and was for some time incorrectly thought to have been dedicated to Ceres. The architecture is transitional, being mainly built in early Doric style and partially Ionic. Three medieval Christian tombs in the floor show that the temple was at one time used as a Christian church. 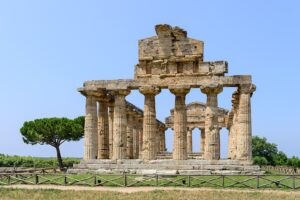 Paestum also is renowned for its painted tombs, mainly belonging to the Lucanian period, while only one of them dates to the Greek period. However, this is the Tomb of the Diver, which is the most famous. It is named after the enigmatic scene, depicted on the underside of the covering slab, of a young man diving into a stream of water. It dates to the first half of the fifth century BC (about 470 BC), the Golden Age of the Greek town. It was found, on 3 June 1968, in a small necropolis some 1.5 km south of the ancient walls. The paintings have now been transferred to the Paestum Archaeological museum. 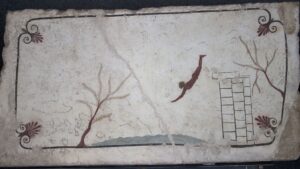 The tomb is painted with the true fresco technique and its importance lies in being “the only example of Greek painting with figured scenes dating from the Orientalizing, Archaic, or Classical periods to survive in its entirety. Among the thousands of Greek tombs known from this time (roughly 700–400 BC), this is the only one found to have been decorated with frescoes of human subjects. 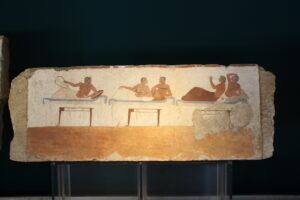 Tomb of the diver in Paestum – South wall. Photo by Michel Gybels.

The remaining four walls of the tomb are occupied by symposium-related scenes, an iconography far more familiar from Greek pottery than the diving scene. 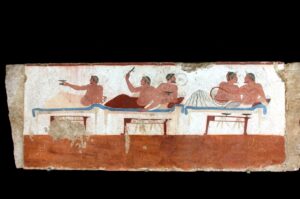 All the five frescoes are displayed in the museum, together with other cycles from Lucanian painted tombs. In contrast to earlier Greek tomb paintings, these later scenes have many figures and a high proportion of scenes including horses and equestrian sports. 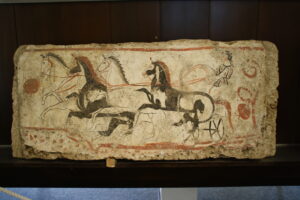 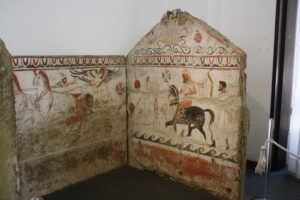