The Roman Villa of Oplontis

Like Pompeii and Herculaneum, the Villa Oplontis was both destroyed and preserved by the eruption of the Vesuvius in AD79. Buried until its gradual discovery over the last four centuries, this huge and lavish palace has been associated on slender evidence with Poppaea Sabina, the unfortunate wife said to have been kicked to death by the Emperor Nero. Her family are believed to have come from this area, and the grandeur of the villa suggests it belonged to someone either very rich or very well-connected. A wine amphora found here bore the inscription of the name “Poppaea”. Consequently the villa is sometimes called Villa Poppaea, and is also known as Villa A by archaeologists studying the ruins around the site of the Roman seaside village of Oplontis (and as Scavi di Oplonti in Italian). 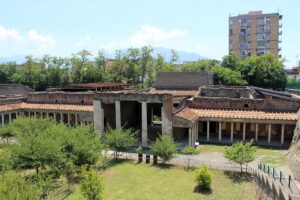 The villa and its garden. By Miguel Hermoso Cuesta – Own work, CC BY-SA 4.0.

Lying under the modern Naples suburb Torre Annunziata, the full extent of the villa complex hasn’t been discovered. But what there is to see is very impressive. The site is under-visited compared to its famous neighbors, and it is a fascinating and atmospheric place to get the feel of real Roman luxury. 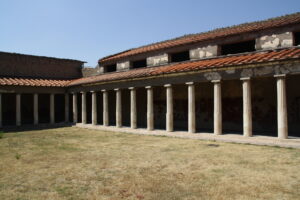 Peristyle of the villa. Picture by Michel Gybels.

The villa is included in the UNESCO heritage listing “Archaeological Areas of Pompeii, Herculaneum, and Torre Annunziata”. The villa makes a good complement to visiting Pompeii and Herculaneum. The impressive state of preservation and the villa’s lavishness help to give context to the urban dwellings in the two larger sites, and its colourful frescoes enable the visitor to visualize the details which have been lost elsewhere.

The Roman elite favoured the Bay of Naples for holiday retreats. Just as today’s wealthy Romans and Neapolitans head to the island of Capri, in ancient times this area was a refuge from the heat and bustle of Rome in summer and a place to relax and indulge in civilized leisure; the pursuit of otium. The Villa Oplontis was a palace built overlooking the sea (the coastline is now further away). 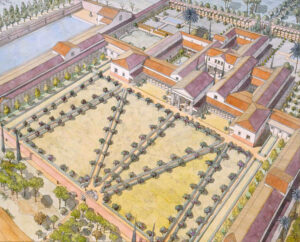 Archaeologists deduce that the rambling building had been through several stages of development, and at the time of the eruption which buried it, the villa was undergoing restoration works, and was perhaps somewhat neglected. There had been a major earthquake in 62AD, and many smaller tremors in the build-up to the big eruption of 79AD, which may explain this. 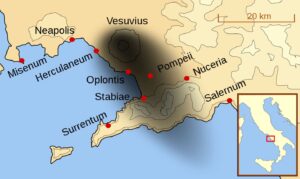 A map showing the cities, which were affected by the eruption of Vesuvius in 79 AD. By MapMaster – Own work, CC BY-SA 3.0.

During its lifespan, though, the villa must have been one of the grandest dwellings in the area. Its wall paintings are some of the finest examples of Roman painting in existence. Its large gardens were decorated with statues as well as trees and plants. Approached by land or sea, the villa would have impressed visitors even before they entered the colourful and refined halls, strolled through its various colonnades, or glimpsed the huge garden swimming pool. 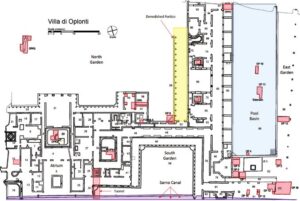 Plan of Villa A at Oplontis with the trenches marked in red. The area marked in yellow highlights the portico that was demolished to accommodate the east wing. The Sarno Canal and the pool basin are respectively marked in purple and blue. Plan: Jess Galloway. Source: Ten seasons of Excavation at Oplontis.

The ruins are well-enough preserved that it’s possible to gain some idea of how people might have lived here; relaxing under a portico, taking a dip in the huge pool. Rooms are numbered and descriptions in the guide-booklet help to explain the decoration and what is assumed about their uses.

The Architecture of the Villa

Among the villa’s comforts was a bath-house, several peristyles (colonnaded courtyards and gardens), and a range of richly-painted reception rooms. 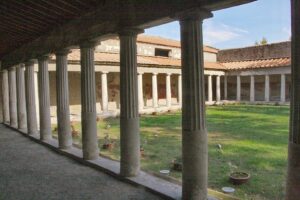 Peristyle on the south facade. By Amadalvarez – Own work, CC BY 3.0.

The most extravagant of these feature detailed illusionistic scenes of architectural features: temples, statues, gateways. 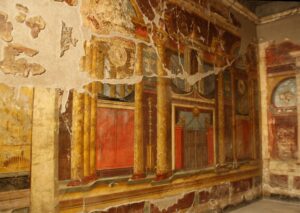 Trompe-l’oeil frescoes in the triclinium. Picture by Michel Gybels.

The villa layout also incorporates service areas: small rooms where slaves may have slept, and narrow corridors providing quick and discreet access between the public spaces. These narrower, humbler corridors are decorated with simple ‘zebra-stripe’ paintwork, used here and elsewhere for the quarters of slaves and staff – although here the ‘cheap’ décor does seem used on occasion for loftier public areas. 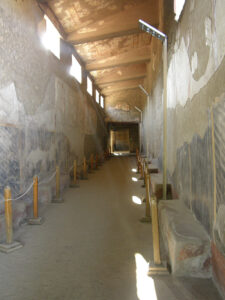 Mostly, it’s clear how much the villa was designed to impress, and how dazzling its grandest spaces must have been. Most visitors would have entered through an atrium (Room 1) with a central pool to catch water falling through an aperture in the ceiling in the center, and walls covered with trompe l’oeil frescoes of columns, doorways and other grand architectural features. 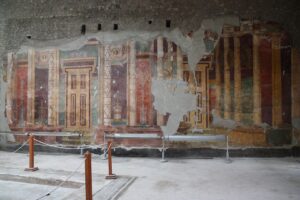 A fresco with two false doors in the atrium of the Villa Poppaea. By Tierceron – CC BY-SA 2.0.

One of the most striking spaces is Room 18, described as a ‘sitting room’, which opened onto the portico in front of the swimming pool and its surrounding garden. At the far side of the room was a large window onto the principal garden of the villa. And on either side, a sequence of windows opened onto rooms richly-painted with garden scenes, and then beyond that into tiny ‘garden’ courtyards, again decorated with garden frescoes. Trees, greenery, flowers, birds and water must have been visible in every direction, both painted and real, with nature being brought into the interiors. 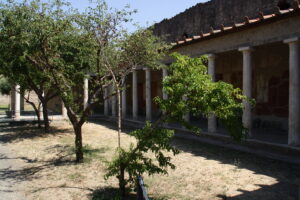 Garden courtyard of the villa. Picture by Michel Gybels.

Although there must have been slaves, attendants and family members around, it’s hard not to imagine the building filled with the same kind of peace that greets the visitor today as they wander around the quiet site, accompanied by the twittering of birds and the wind in the grass and leaves. The work that has been done to recreate the original garden plantings adds greatly to the atmosphere, which is so different to the busier and barer ruins of Pompeii and Herculaneum. 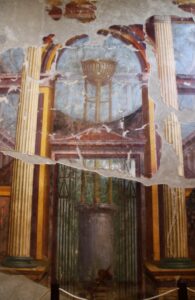 The freedom to wander around a grand Roman villa over mosaic floors, to stand alone in a room gazing at the vivid frescoes, or to duck along a narrow service corridor is really special.

The identification of the excavation site of the Villa took place at the end of the 16th century during the construction of the Sarno Canal, excavated by Count Muzio Tuttavilla in the area of what is known today as Fabbrica d’Armi as well as near the port.

In the eighteen century, riding the wave of the enthusiasm for the recent discoveries of Herculaneum, Pompeii and Stabia, the Bourbon government promoted archaeological research initiatives through out the Vesuvian territory and the first excavation was attempted in Mascatelle for the Torre Annunziata area. 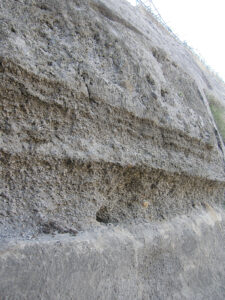 In 1785 Francesco La Vega, the military architect in charge of the excavations, reported having inspected the ruins identified here. Other investigations took place in 1839 who made it possible to fully comprehend the great importance of the area.

The excavation of Oplontis was no longer discussed for more than a century, until a committee of local enthusiasts managed to bring attention to the site. Ten years of uninterrupted excavations brought to light a building that had 90 rooms spread over 10,000 square meters. 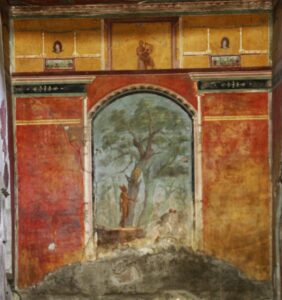 Fresco in the Baths part of the villa – Calidarium. Picture by Michel Gybels.

In 1974, about 300 meters east of Villa A, workers found the Villa B of Lucius Crassius Tertus. In one of the rooms of this complex, in 1984, a treasure trove of jewels and coins, the so-called Oplontis Golds, was found. The building is currently closed to the public.

The Villa Oplontis is included in several combined tickets, so visitors should think ahead to work out the most cost-effective choice. A basic entrance ticket also includes admission to archaeological sites at Stabia and Boscoreale. The villa is also included on a combined ticket with Herculaneum and Pompeii (the sites are administered together), and as one of the free sites with a Campania Arte Card.

Rooms in the villa are numbered and a good pamphlet, available in English and included with your ticket, provides descriptions and explanations for each featured location.

The archaeological site is a few minutes’ walk from the Torre Annunziata station of the Circumvesuviana train which runs from Naples to Sorrento. From Napoli Garibaldi the journey takes 30 minutes, and from Sorrento 33 minutes.

You can see the site quite thoroughly in an hour, and it can be combined with Herculaneum in a comfortable one-day itinerary.

Source: Guide to the Oplontis excavations