The Flavian Amphitheater of Pozzuoli

The History of the Amphitheater

The building was begun under the reign of the emperor Vespasian and probably finished under the reign of his son Titus. The elliptical structure measures 149 x 116 meters, with the arena floor measuring 72.22 x 42.33 meters. The arena can hold up to 50,000 spectators. 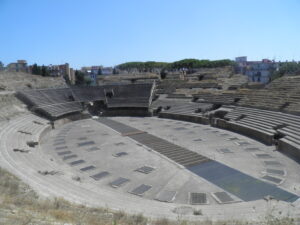 Arena of the Pozzuoli Amphitheater. By Wojtek-Rajpold – Own work, CC BY-SA 4.0.

The interior is mostly intact and one can still see parts of gears, which were used to lift cages up to the arena floor. In 305 A.D., the arena was the setting for the persecutions of the patron saint of Pozzuoli, Saint Proculus, and the patron saint of Naples, Saint Januarius. After surviving being thrown to the wild beasts in the arena, the two were beheaded at the nearby Solfatara volcano. 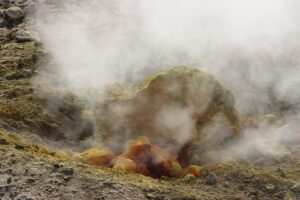 The Flavian Amphitheater is the second of two Roman amphitheaters built in Pozzuoli. The smaller and older amphitheater (Anfiteatro minore) has been almost totally destroyed by the construction of the Rome to Naples railway line. Only a dozen arches of this earlier work still exist. This lesser amphitheater measured 130 x 95 meters.

The approximate location of the older Amphitheater of Pozzuoli. Google Maps and Timetravelrome

The site of the structure was chosen at the nearby crossing of roads from Naples, Capua, and Cumae. It was abandoned when it was partially buried by eruptions from the Solfatara volcano. During the Middle Ages, the marble used on the exterior was stripped, but the interior was left alone and is perfectly preserved. Excavations of the site were performed from 1839 to 1855, 1880 to 1882, and finally in 1947. 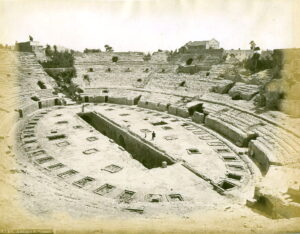 Its above-the ground structures are similar to those of the amphitheater of Verona, built around the middle of the first century. Its perimeter follows a polycentric curve. Its elaborate subterranean vaults resemble, instead, those of the Flavian Amphitheater in Rome.

The Architecture of the Building

The amphitheater was surrounded by a two-storied portico built on a pavement of travertine slabs. The original pillars of the portico, made of trachyte blocks aligned with its radial walls, were reinforced later on, in the age of the Antonines, with large brick pillars that occupied much of the portico, reducing its width from fourteen to eight feet. On the outside the portico was graced by Tuscan half-columns on Attic bases, and two -column marble prothyra near the four main entrances.

Reconstruction of the Amphitheater. Photo by Michel Gybels.

The façade of the monument was arranged on three stories, with arcades on the first two and on the third a gallery consisting of a wall with a row of windows graced by statues and columns. A row of pairs of ledges placed one above the other protruded from the outer wall of the colonade of the gallery.  They originally held the poles supporting the velarium a “campana luxuria” whose purpose was to shield the public from the rays of the sun. 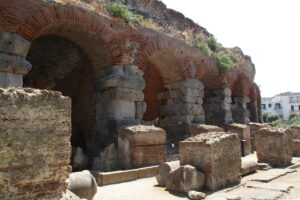 Arcades of the Amphitheater. Photo by Michel Gybels.

The numerous grooved columns and Corinthian capitals moved to the underground vaults of the amphitheater after the end of the Bourbonic excavation, also belonged to the colonnade of the gallery. 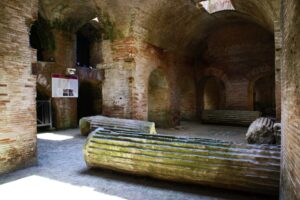 Columns in the underground galleries of the Amphitheater. Photo by Michel Gybels.

Some of the radial rooms opening onto the outer portico were probably scholae, i.e. the seats of associations and collegia. The discovery in situ along the southern side of the amphitheater of a floor inscription has made it possible to identify one of them as a cult room decorated by Gaius Stonicius Trophimianus. It must have been faced with marble and decorated with a series of small statues.

The outer portico gave access to the four monumental gates, each consisting of a three nave vestibule placed at the extremities of the long and short axis. To avoid crowding there were also twelve secondary entrances. 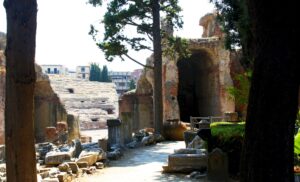 One of the monumental gates – entrance to the Amphitheater. Photo by Michel Gybels.

In the two vestibules along the long axis (itinera magna) were ramps by which carriages could descend into the underground rooms, where all the equipment used for the shows was kept. 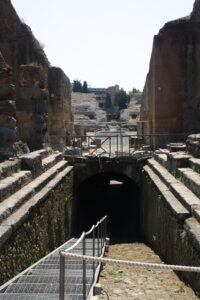 One of the ramps used by carriages to descend into the underground rooms. Photo by Michel Gybels. 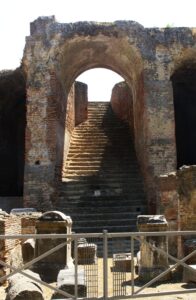 A staircase leading to the summa cavea. Photo by Michel Gybels.

Spectators reached the lower cavea, descending down to the wall (balteus) enclosing the arena, by four wide staircases placed at the sides of the entrances on the long axis, or twelve gradually ascending radial corridors leading directly from the outer portico to the arena. A corridor runs under the podium. On the south side of this corridor is a semicircular room used as a chapel of the tutelary deities of gladiator games, and possibly also for the cult of the Emperor. 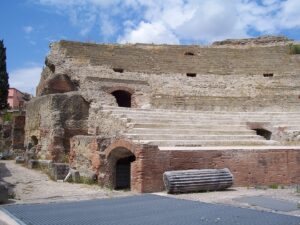 The underground chambers could be reached primarily by two steep ramps built to take horse-drawn carts along the main axis. Prior to the start of the spectacles these corridors were covered over with wooden boards to allow the public to reach the terraces and circulate freely in the arcade. In addition to these two principal access points, there were eight narrow stairways leading down to them at the ends of the corridors running round behind the podium of the arena. 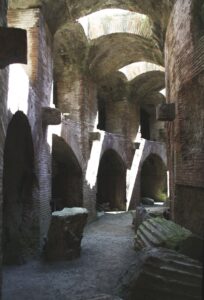 Underground structures of the amphitheater. Photo by Michel Gybels.

None of the underground structures led out of the amphitheater itself. The reason for this far from ideal logistic situation lay in the amphitheater’s location up against the hillside of the Solfatara, hemmed in round much of its perimeter. There was simply no large flat area close by suitable for tunnelling through to provide access points to the exterior. The only exception was the north-western sector and here the amphitheater gave onto a highly built-up area and a major highway. 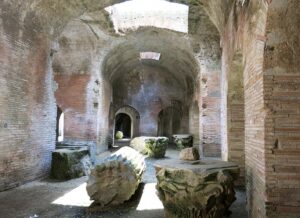 Actual Situation of the Amphitheater

During my visit to the amphitheater in August 2022, only the exterior and some of the underground areas were open to visitors. The theater itself was closed due to new excavations and due to dangerous situations for visitors. My question to the ticket office clerk as to when the site would be fully accessible again could not be answered. 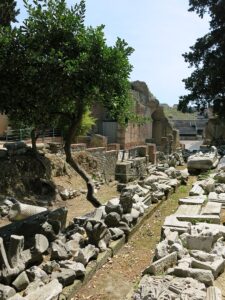