At the Edge of the Empire: The German Limes

The Upper German-Rhaetian limes (called in German “German Obergermanisch-Raetischer Limes” – ORL) was part of the Roman Empire border and included a number of defensive structures such as forts and watchtowers. The huge defensive line was erected by the Romans to protect the borders of the Germany superior and had a length of 550 kilometers, passing between the Rhine and the Danube.

The systematic excavation and study of the ORL limes was first conducted at the end of the 19th century by the German Imperial Limes Commission (RLK) under the direction of the famous historian, Theodor Mommsen. The Commission numbered the various sections of the defensive network, and attributed numbers to all forts and the watchtowers (Wp) on the individual sections. For example, the beginning of the Upper-Germanic-Rhaetian Limes is at Rheinbrohl and the “caput limites” is marked by the watchtower 1/1. The first 75 km of the Limes, consisting of 131 guard posts, 9 small castles and 9 kohort castles, run through the Rheinland-Pfalz region.

The ORL line was visited recently by Michel Gybels: Michel’s photos and comments, together with selected TimeTravelRome  content, are presented in this post about the most interesting ORL sites.

Rheinbrohl – Where the limes begins

Rheinbrohl fort stood on the right bank of the Rhine and comprised a single building surrounded by a wall defended by two trenches to deter attack. It appears to have been destroyed by fire around the time that the Limes were finally abandoned – any remains of the fortlet have been destroyed in the process of gravel extraction.

Because it is located near the point where the Limes defences begin, Rheinbrohl is the site of an official Limes Visitor Centre. A nearby reconstructed Limes watchtower near Rheinbrohl has been criticized for its inaccuracy but elsewhere it is possible to find traces of the original rampart as well as a reconstructed section of palisade. 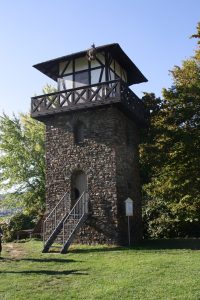 RömerWelt and Limes Museum in Rheinbrohl offers an interesting overview of this site history, and replicas of various objects and materials from the Roman period can be seen.

On initiative of the citizen of Idstein, Ottmar Weigel, a reconstruction of the Roman watchtower was built in 2002 according to the latest scientific findings and not far from the location of the tower in ancient times. The forces deployed in the towers guaranteed the guarding of the Limes. The ground floor was used for the storage of food. On the central floor, the living room and the entrance were located, accessible only by ladder. The upper floor served the g