The Gallo-Roman Site of Argentomagus in France

Situated on the north bank of the River Creuse in central Gaul, the city of Argentomagus (meaning ‘money market’) was already a local centre before the Romans arrived around 50 BC. The Romans built a bridge across the river and Argentomagus became a thriving center of trade in the second and third centuries AD. The Roman city of Argentomagus largely escaped rebuilding in later centuries so there are impressive remains to be seen. These include a Roman villa, an amphitheater, and a monumental fountain that appears to have had some religious significance.

The oppidum of Argentomagus is located in the southern part of the ancient region of the Bituriges, about one hundred kilometres from their ancient capital Avaricum (now Bourges).

The site occupies a mainly square plateau with a surface area of 27 hectares and is the second largest oppidum of the Berry region. To the south, the site is naturally defended by high rock formations along the river Creuse, to the east by abrupt slopes giving onto the source of the Mage and to the west by a valley where a double artificial wall was built with a moat along the outside. 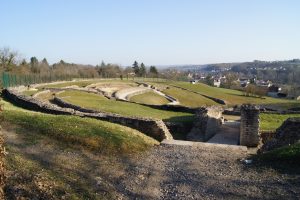 In the northwest, the remains of the only access to the site at the time are still visible. This access was protected by a long and wide ditch of more than 80 metres, which had to deter possible besiegers. Inside the oppidum, numerous traces of the Roman-Gallic period are still visible.

Many structures date back to the first century B.C. and many archaeological artefacts have been excavated, such as parts of bronze colanders, Nauheim fibulae, iron fibulae, slate bracelets, glass and amber pearls and bronze buckles.

When the construction of a theatre was undertaken, Argentomagus thus confirmed its first place in the network of secondary Biturian agglomerations. The first version of that monument had only one brick wall.

Around the year 150, the notables of Argentomagus were confronted with a serious problem. The theatre was in poor condition and too small to accommodate the entire population of the city. It was therefore decided to demolish the old theatre and build a new and larger one. Many of the building materials recovered from the old theatre were used to build the new one. New walls were erected, arches for the passages were erected and the place for the cavea, the scena and the decor were determined. When completed, Argentomagus had a theatre of 85 metres in diameter surrounded by concentric corridors that could easily divide the audience. The dignitaries had their own seats against the wall of the orchestra and also their own entrance, which was also reserved for the priest who led the ludi scaenici and took place on a stage at the cavea. In this way, the social hierarchy was respected at all times. 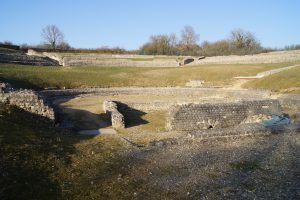 The theatre of Argentomagus served throughout the second century AD until the beginning of the third, when Gaul, like other regions of the Roman Empire, was experiencing serious economic problems.

Later, the construction was used as an amphitheatre for numerous spectacles. The building, which is between 80 and 100 metres long, has never been the subject of archaeological excavations. Only the two outer walls were uncovered. 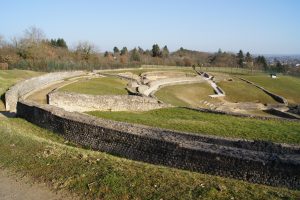 The discovery of a monumental and well-preserved well house from the first century B.C. provided a good focal point for the archaeological excavations at the site. The well house comprises an almost square water basin with a maximum volume of 24 m³. At the corners of the basin, four pillars reinforce the stability of the construction. To the north and south, there are two large symmetrical staircases, consisting of 14 steps. 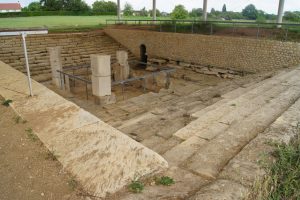 The Basin at the site of Argentomagus. Picture taken by Michel Gybels. Used by permission of the author.

The well house was supplied with water by a nearby aqueduct with a wooden pipe network on which the necessary pressure was applied to make the water flow. There was always more than enough water supply via the plateau of Mersans.

The sanctuary of Mersans consists of a cult complex of two square temples with a gallery and a third rectangular building consisting of a square cella preceded by a pronaos. The sacred space in trapezoidal form is closed off by a rampart.

In the area where the cult temples were located, traces of habitation during the Augustan period were uncovered, including a cult building with a 5 m. long cella preceding a 2 m. long pronaos. This building was constructed according to the classical temple plan commonly found in southern Gaul at that time. 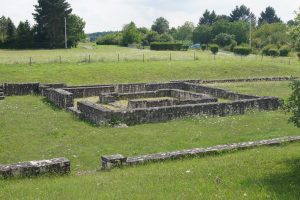 Temple Complex of Argentomagus. Picture taken by Michel Gybels. Used by permission of the author.

Other buildings in this area are located after the period of Claudius, during which the sanctuary was considerably extended, as well as during the period of Nero and the beginning of the period of Flavius. 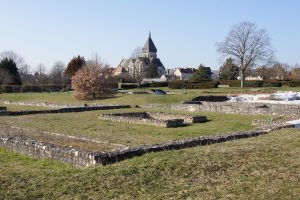 Temple Complex of Argentomagus. Picture taken by Michel Gybels. Used by permission of the author.

A thermal building was also uncovered in Argentomagus. Its floor is made of limestone tiles of 3 cm. thickness and its walls were mortared and finished with a marble plinth of 16 cm. height. Nearby, two sculpted blocks and a capital belonging to a pillar were found, which apparently framed a doorway possibly opening onto a swimming pool. The study showed that this capital dates from the second half of the second century of our era.

In the centre of the ancient city, the house of Quintus Sergius Macrinus was excavated in 1970. Its preserved walls measure 32 m. long by 20 m. wide. The domus consisted of at least three rooms, one of which was heated by a hypocaust. Another house was uncovered in the crypt which is now the site of the museum.

Numerous excavated artefacts are displayed in the new large museum on the site.

The Argentomagus site is located in Saint-Marcel near Argenton-sur-Creuse and is easily accessible from the A20 motorway, exit 17.

The site of Argentomagus is well featured on the TimeTravelRome mobile app: main monuments are located on the map and described. Our recently added App feature – “roman roads” – also allows to see that Argentomagus once stood at the crossroad of several regional ways. Download our App and discover more about Argentomagus and plenty of other Roman sites in France and elsewhere.

Source of the featured image: By Dominique Robert Repérant – Own work, CC BY-SA 4.0