Roman Villa of Nennig and its Gladiatorial Mosaic

The Villa of Nennig was discovered by chance in 1852: its discovery is due to a peasant digging a pit in his garden intended for the conservation of vegetables. The Archaeological Society of Treves, warned of the find of Roman remains, hastened to acquire the land and erected a temporary protective construction. The ruins of the villa are noted for their exceptional mosaics, which have survived in remarkably good condition. They are considered as one of the most important of its kind north of Alps and they include vivid depictions of gladiators fighting.

According to evidence of various finds (coins, fibulae, ceramics), the Villa of Nennig was founded in the 1st century AD. The Villa was divided into a living area (Pars urbana) and an economic area (Pars rustica). The latter consisted of a courtyard through which a paved road lead from the Moselle river to the manor house. Utility and residential buildings stood on both sides of the courtyard. 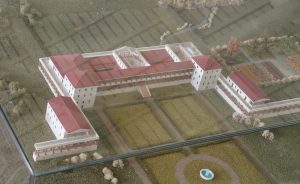 The Pars urbana of the villa included a residential building 120 m wide with a portico facade, two spacious side wings (guest apartments) connected to the main building by porticos, a vast 500 m² large bathhouse and an 260 m long Garden portico between the main house and the Baths. It was certainly a splendid residence, one of the most beautiful and luxury in the region. The villa was likely abandoned by the end of the fourth century.