Originally established by Celtic-Germanic tribes of the region, Augusta Treverorum, or “City of Augustus in the land of the Treveri,” was so named during the reign of Emperor Augustus, who visited the region around 15 BC. It became an influential settlement, in part thanks to its location along the Moselle River Valley and also because it was a hub of fiscal and military transactions for the Roman Empire. The colony – as it was known from the days of Emperor Claudius – maintained is prominence until the third century, when attacked from outside populations led to its decline. Revived, though, during the fourth-century reign of Diocletian and the Tetrarchy, the city returned to prosperity.

The main vestiges of this prosperous period are well known to visitors. For example, Porta Nigra, the fortified city gate built in the late second century and now recognized at the largest Roman city gate north of the Alps.

Also visible are substantial portions of the Imperial Baths constructed in the city in the fourth century at the behest of the Emperor Constantine. This complex was renowned in its own time and is also known today as the largest surviving portion of a Roman bath complex outside of Rome. 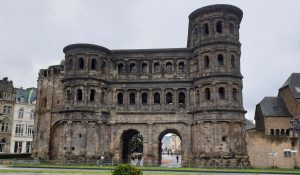 Other famous and often visited sites include the bridge that crosses the Moselle and the Aula Palatina, also built by Constantine as part of his palace complex. Considered the largest extant ancient Roman basilica hall by UNESCO, the space is today consecrated as the Church of the Redeemer.

However, fans of Roman history can visit several other places of interest in Trier. Some sites are out of the way and are visited less often than others, while others are not even on tourist maps. In order to correct this injustice, we are going to offer you our selection of the seven less known Roman sites in Trier.

The Barbara Baths were built during the later half of the 2nd century AD to service the growing population. The water for the baths came via the Ruwer aqueduct which was built around the same time. The baths continued to be used until the 5th century. The Barbara Baths were listed as part of Trier’s UNESCO World Heritage Site in 1986. A modern walkway has been designed to give visitor access to the ancient ruins. Parts of the frigidarium, tepidarium, caldarium, and service corridors still remain visible. The place is very pleasant to visit thanks to the mounted footbridge, which crosses the archaeological area. Several information boards provide rich information on the excavations and the functioning of baths in antiquity. 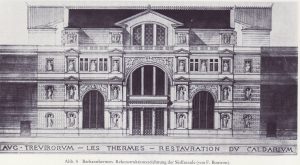 Path for visitors over the excavations area. Source: TimeTravelRome.

The Forum Baths, or Baths of the Cattle Market, were located immediately north of the forum. The building itself was first constructed in the late 1st century AD. The ruins were discovered in 1987 during construction of a car park. The remains of the Forum Baths are on display in a viewing area with an attached museum. The remains of the caldaria and frigidarium, several external walls, the drainage system, and hypocaust heating system are on display inside a glass-walled building. Roman remains can be well seen through the panoramic windows even if the building is closed.

The view on the excavation area. Source: TimeTravelRome.

Another view of the site. Source: TimeTravelRome.

The Sanctuary of Lenus Mars was a walled religious precinct located on a terrace on the western bank of the Moselle. The Romans incorporated the Treverian gods into their religious worship enlarging the site of an existing Celtic Treveri centre with a monumental Roman temple in the 1st century AD. The precinct included a Gallo-Roman style temple, a smaller shrine, a cult theatre, residential buildings, and a sacred spring with baths. The main temple of Lenus Mars was located to the north of the precinct.  The centre continued to be used through to the time of Emperor Gratian in the late 4th century. Much of the stonework was robbed during the Medieval period. The foundations and podium of the temple remain visible, and are accessible to the public. The source of the Irminenwingert spring is also visible nearby.

The current state of the Temple area is much less impressive than in the past. Source: TimeTravelRome. 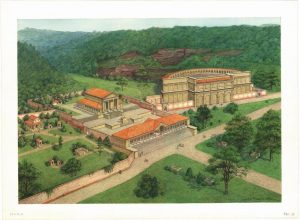 Temple area of Lenus Mars – Reconstruction. From the Vici.org. Public domain according to the source.

Ancient Trier was surrounded by a fortified city wall totalling 6.4 kilometres in length and enclosing an area of 285 hectares. Recent dendrochronological analysis has dated the wall’s construction to AD 170. The majority of the wall was built 6.4 metres high with a mortar and rubble core with sandstone facing. The foundations were 4 metres thick, narrowing to 3 metres at the ramparts. It had some 50 defensive towers, four main gates, with at least two additional pedestrian gates. The southern sections of the wall were later entirely robbed for stone and destroyed to foundation level. Some sections of wall remain along the northern perimeter but the best-preserved section of ancient wall is located at Schießgraben in the public park just north of the vocational school.

Another view on then wall. Source: TimeTravelRome.

The Temple of Asclepius, the Greek and Roman god of healing, was built on the banks of the Moselle between AD 161 and 169 with significant modification during the 3rd century. The temple precinct covered an area of 170 x 88 metres, while the temple itself sat on a raised podium measuring 45 x 26 metres. The temple was enclosed on the northern side with a colonnade portico. The remains of the temple were later discovered in 1977 during construction of a car park attached to the Borromäerinnen hospital. Very little of the ancient temple remains to be seen as much of it was destroyed during construction of the parking garage. Only the partial remains of the rear wall of the temple have been preserved and can be seen from inside the car park. More precisely, the remains can be found in the parking lot for visitors to the nearby hospital – they can be accessed freely from the small street called Hinter dem Zollamt. Obviously, a wall in a parking lot is of little interest to most visitors, but fans of Roman history will probably be happy to see it.

The Temple of Asclepius of Trier is otherwise well known to thanks an immense hoard of 2,570 gold coins weighing 18.5kg, that was found nearby in 1993. The coins date to the reign of Septimius Severus. They were found inside a 25cm high bronze cauldron fitted with a lid and handle. The hoard is today in the Rhine museum. 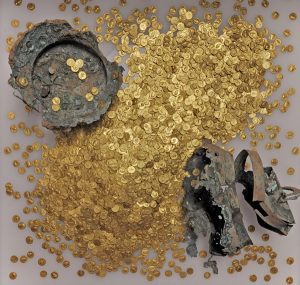 6/ Temple of Mars and the Spring at Herrenbrünnchen

The remains of a classical style Roman temple were found during in 1909 on the grounds of the Charlottenau Winery. Excavations revealed the temple at Herrenbrünnchen had a foundation measuring 65 x 23 metres, with the foundation walls over 4 metres thick.  It consisted of a monumental podium with two staircases leading to a columned pronaos and cella. There were six columns across the front, measuring 15 metres in height. The altar was located in front of the stairs. Archeologists say that the temple was dedicated to Mars Victor Augustus by the city’s official.

There are no more visible remains of the temple at Herrenbrünnchen. Interpretive signage has been erected on the site, however the temple’s foundations remain below the modern gardens. Several arches from the portico are on display at the Rheinisches Landesmuseum. The ornate limestone columns of the Trier Cathedral are likely to have been taken from the ruins of the temple for use after the Cathedral was damaged by fire in the 5th century. 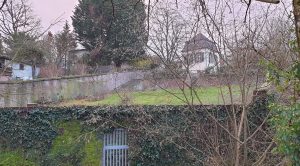 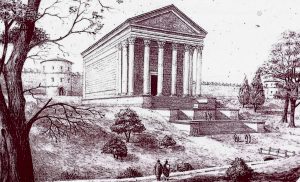 Reconstruction of then Temple (from the information board). Source: TimeTravelRome.

The site is located in a beautiful setting, surrounded by gardens and there is a spring of water which feeds a stream. Local legend says that Bishop Eucharius baptized the first Christians from Trier here. And the spring was the source of water supply up to 1970.

A stream passing in front of the hill where the temple was located. Source: TimeTravelRome.

7/ Horrea and the Wine Cellar

The horrea was a granary storehouse located near the harbour, just within the city walls on the northwestern corner of the ancient city. It was built around AD 330, and may have been used as a military storehouse. It consisted of two large halls, each 19 metres wide, which were separated by a 12 metre wide courtyard. The walls were almost 1 metre thick and further strengthened with pilasters with blind arcades. The outer walls were lined with slit windows aligned with the central spaces between each columned cubicle inside the store. The original building would have been two storeys high, although no evidence of a stairway was found.

The warehouse became part of a Benedictine Abbey in the 7th century. A vineyard was later cultivated on the site with the horrea used as a cellar. Today the wine cellar is called Vereinigte Hospitien and is considered to be the oldest wine cellar in Germany. The site can be visited and remains of Roman structures can be seen. In particular, some of the original walls are visible including a row of arcatures and a large section of Roman brick flooring. 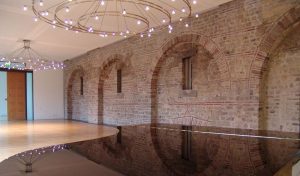 The “Roman Hall” inside of the Vereinigte Hospitien building.

The outside courtyard is very pleasant  too – you can see the remains of Gothic constructions there.

The outside view of the Vereinigte Hospitien Wine Cellar with Gothic columns. Source: TimeTravelRome.

Trier on the TimeTravelRome mobile App

It remains for me to say that I visited all these places thanks to the TimeTravelRome app – the app showed me the exact location of all these places (of course, in addition to all the other major monuments in Trier) . The descriptive text of the various sites above was also taken from the TimeTravelRome app. I only have to advise you to download it and use it to make your own discoveries in Trier or elsewhere. 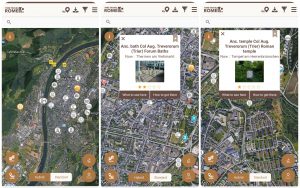