The Origins of the Island

The island of Aegina lies in the Saronic Gulf of Greece, south of island of Salamis where the allied Greek city-states managed to defeat the invading Persians in a great sea battle. Aegina is predominantly made up of a now extinct volcano, which accounts for Aegina’s fertile landscape. Today, the island produces cotton, grapes, almonds, olives and figs, though its chief crop is pistachios. It is also a popular tourist destination, offering beautiful beaches on an island getaway only a short ride from the mainland by ferry. 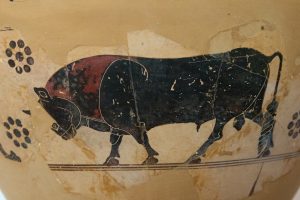 Aegina was inhabited since the Minoan period at least, if not longer. It engaged in heavy rivalry with Athens during the classical period of Grecian history, boasting its own high quality navy – not to mention the attention of gods and heroes.

Aegina took its name from a nymph, one of the daughters of the river god Asopus and his wife, the river nymph Metope. The couple had many daughters, and most of them became the object of desire of either Zeus or Apollo. Aegina caught the eye of Zeus, but she was not willing to be his consort. Refusing to be denied, Zeus made himself a great eagle and abducted the girl. He took her to the island now known as Aegina, then called Oenone. In a rage, Asopus began a search for his daughter, and eventually came to the great city of Corinth. 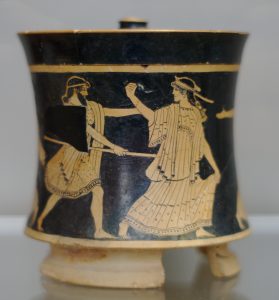 Attic red-figure pyxis (c.470–460 BC) showing the abduction of Aigina, one of the daughters of Asopus, by Zeus. By Caeciliusinhorto – Own work, CC BY-SA 4.0.

King Sisyphus of Corinth, a wily and crafty ruler, had seen Zeus carrying off Aegina and offered to tell Asopus if the god would strike a spring into the acropolis of Corinth. Asopus pursued Zeus to the island on Sisyphus’s information, but Zeus threw down his thunderbolts to stop Asopus and retain his prize. Learning who had betrayed his location, Zeus sent death to claim Sisyphus’s life and chain him up in Tartarus, but Sisyphus tricked Death and locked him up with his own chains.

The Myth of Sisyphus

Without Death able to perform his job, the Earth plunged into chaos. The horribly diseased, mortally wounded, bled out, missing limbs or even decapitated wandered about, unable to die. Eventually, Death was freed by Ares, the god of war, who was frustrated that his battles were not nearly as fun when his opponents wouldn’t die. Ares delivered Sisyphus back to Hades, but he would once again cheat death and return to the surface, begging Persephone to allow him back up to make sure that he was given proper funeral rites. 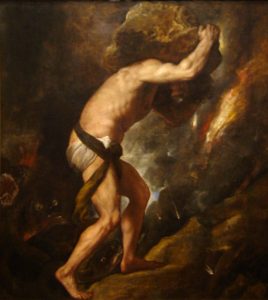 “Punishment of Sisyph” – painting by Titian (1488-1576). Photo taken by Dodo. Retouched with clens and the Gimp., Public Domain.

He promised to return in three days, but obviously had no intention of keeping that promise, and lived out his days until finally dying of old age. In punishment for his schemes, Sisyphus was given eternal punishment in Hades, condemned to carry a rock up a steep hill. When he had almost reached the top of the hill, the rock would inevitable slip from his grasp and roll back down, and he would have to go get it to roll up the hill again – forever. Sisyphus’s fate forms the backdrop of the famous Absurdist essay by Albert Camus, The Myth of Sisyphus.

Meanwhile, back on Aegina, the young nymph gave birth to a son, Aeacus, who was raised to immortality by Zeus and became the first king of Aegina. His rule began in hardship, however, when a Jealous Hera sent a plague that wiped out the inhabitants of Aegina. Aeacus noticed a large colony of ants in a large oak tree, and prayed to Zeus to make the ants into men. Zeus accepted his prayers, and the morphed ants repopulated Aegina as Aeacus’s subjects.

Aeacus became renowned as a wise, just, and piously devoted king. He became a great favorite of all the gods, and even they would come to him to help settle their disputes. On one occasion, when the gods became angry with Greece and sent a great drought, they informed the Oracle at Delphi that only the prayers of Aeacus could possibly save the land. When planning the foundation of the great city of Troy, Apollo and Poseidon brought Aeacus with them to help design the walls. 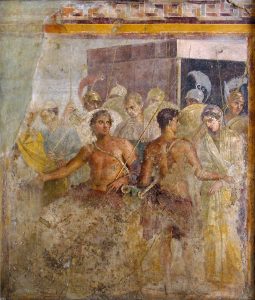 Achilles’ surrender of Briseis to Agamemnon, from the House of the Tragic Poet in Pompeii, By anonymous, Public Domain.

Construction of the walls was not Aeacus’s only connection to Troy either, as his son Peleus would go on to father the great hero Achilles, who led the Myrmidons in the Siege of Troy. Aegina had another son, Menoetius, by the mortal Actor. Menoetius became the king of Opus, and joined Jason’s Argonauts in the search for the Golden Fleece.  Aegina’s grandson through Menoetius was Patroclus, the cousin and close friend of Achilles who fatally accompanied him in the attack on Troy.

With the coming of Philip II and Alexander, Aegina joined the rest of Greece in falling under the rule of the Macedonians, the Antigonids, and finally the Romans. Under Roman rule, Aegina became a hub of many different religions. Not only did it maintain its connections to traditional gods and goddesses of Greek and Roman mythology, but also fostered a thriving Jewish community and became the home of a fledgling Christian community, led by bishop Crispus. Aegina became part of the Eastern Roman Empire after the split, and flourished as a part of the new Byzantine Empire. 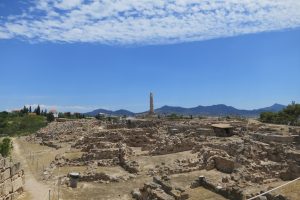 Archaeological site at Kolona in Aegina. By Zde – Own work, CC BY-SA 4.0.

Without doubt the most impressive site to see at Aegina is the Temple of Aphaia, the mother-goddess. Built in 500 B.C., the temple you see today is a rebuild of a temple destroyed in around 570 B.C. by a fire. Aspects of the destroyed temple have been recovered display many traces of paintwork. The pedimental sculptures are impressive – as well as indicators of a stylistic change from Archaic to early Classical – are on display in the Glyptothek museum in Munich. There are a range of fragments and smaller finds on display at Aegina and on the site itself. 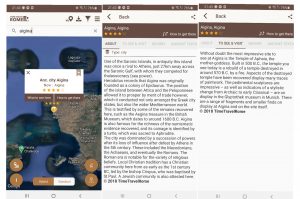