No archeological tour of Italy would be complete without a visit to Tibur, modern Tivoli. The city has a long history, dating back to the 13th century B.C., when colonists from Alba Longa settled on the site. Tibur held a tumultuous relationship with Rome before it fell to its southern neighbors. Rome granted citizenship to Tibur in 90 B.C., after which the city became a favorite for wealthy Romans. Its streets housed luxurious villas for many famous individuals, including the poet Horace, and possibly Catullus and Statius as well, Maecenas, Emperor Augustus, and Zenobia of Palmyra, among others.

However, the most famous villa at Tibur belonged to the Emperor Hadrian. His sprawling residence was built to house any number of politicians and so continue the business of state outside of Rome, as well as being a private getaway for the emperor, who, despite his public charisma, remained something of a recluse. Today, Tibur houses a number of magnificent archaeological structures, including segments of Hadrian’s spectacular 200 acre villa, of which only a portion has been excavated.

Despite the relatively mundane official history of Tibur, the Romans, of course, enjoyed a more colorful version. According to Cato the Elder, Catillus the Arcadian, son of Amphiaraus founded the city. Amphiaraus had been a highly honored seer and king of Argos. The legends tell of a fateful attack on Thebes, immortalized by Aeschylus in 467 B.C. in his tragic play “Seven Against Thebes.” Upon learning of his terrible patricide and marriage to his mother, the infamous Oedipus blinded himself and cursed his two sons, dooming them to divide the kingdom through violence. The sons, Eteocles and Polynices, attempted to subvert the curse by agreeing to take turns ruling Thebes. However, after his first year of rule, Eteocles refused to hand the throne to his brother. 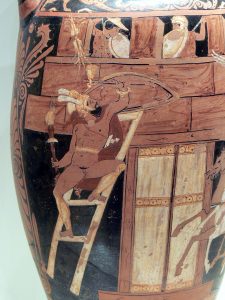 Polynices subsequently went to Argos. He bribed the wife of Amphiaraus, Eriphyle, with a necklace that had belonged to the daughter of Aphrodite. In exchange, she convinced her husband to join Polynices’ campaign against his brother. Despite knowing that the attack would fail, Amphiaraus fought bravely, but was eventually slaughtered along with the others. The Tiburtines believed that Amphiaraus had a son named Catillus who had accompanied him to Thebes. Catillus managed to escape the slaughter, and fled to Italy, where he established the colony of Tibur.

During Etruscan times, Tibur was a Sabine city. Though initially friendly with Rome, in 361 B.C., the city allied itself with the invading Gauls. After the Romans defeated the Gallic invaders before the Colline Gate of Rome, the Gauls fled past Tibur. As they did so, some Tiburtines came out to watch, and pursuing Romans killed them as they passed. Because of this, consul Caius Poetilius Balbus celebrated a triumph over both the Gauls and the Tiburtines. The Tiburtines merely laughed at his triumph, asking when he had ever faced them in open battle.

Details of the antique walls of the city of Tivoli dating from the 4th century BC. By LPLT – Own work, CC BY-SA 3.0.

Accordingly, soon after, a group of Tiburtines marched on Rome, but they had been hoping for a surprise attack. The Romans were alerted, and soon attacked, driving the Tiburtines to flight. In the campaign that followed, Rome soundly defeated Tibur, and took several cities from them before the two cities negotiated a truce. In 338 B.C., Tibur officially became a part of Roman territory. Sections of the city’s defensive walls from this era remain in modern Tivoli.

Prophecy of the Tiburtine Sibyl

One of Tibur’s most famous individuals was the Tiburtine Sibyl, a respected oracle who contributed to the Sibylline Oracles of Rome. Ruins of her temple exist to this day. Ancient writers told of her encounter with Augustus, where he asked her if he should be worshipped as a god. Later Christian writers particularly enjoyed recounting this tale, and added that in reply she told him of a vision of Mary with the infant Jesus, sitting in prominence in the city of Rome. 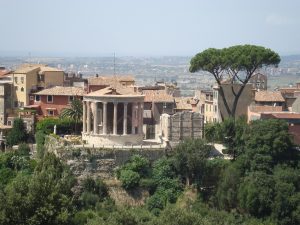 The most famous piece by the Tiburtine Sibyl was her graphic and detailed prophecy of the end of days. It was a bestseller, and a number of scholars re-copied it throughout the medieval era, with probable errors and misinterpretations. However, it appears that the prophecy came to the sibyl as dream. In it, she saw nine suns in the sky, which represented nine generations of mankind. Each sun appeared more ugly and bloodstained than the one before it, and following the last sun came judgment day.

Few places in the world are able to capture the extravagant and monumental extremes of Roman luxury like Tivoli. The area is simply bursting with magnificent sites. The most famous is without doubt Hadrian’s Villa, built in the first couple of decades of the second century AD. By 128 AD, it seems the 250-acre villa complex had become Hadrian’s official residence, connected to the capital via an efficient postal network and able to accommodate any number of emissaries or guests an emperor might have to entertain. Much of the villa remains unexcavated, but what is visible is truly magnificent. The remains of the Island Villa capture what was most likely the most beautiful pat of the emperor’s grand design, while the vast complex of baths, fountains, statues and even a theatre pay testament to the imperial scale of the project. 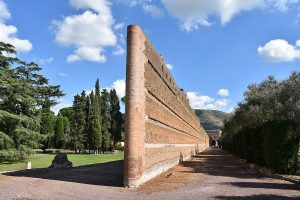 Tivoli – Wall of the Poikile of Hadrian’s Villa. By Patrik Kunec – Own work, CC BY-SA 4.0.

As well as Hadrian’s Villa, Tivoli is also home to the Temple of Vesta. Idyllically situated atop the ancient acropolis in Tivoli’s countryside, this circular temple dates to the first century BC. As is visible from an inscription on the temple’s architrave, one Lucius Gellius is to be credited either for constructing or restoring the temple. In its near vicinity lies another rectangular temple, often attributed to the Tiburtine Sibyl, while just outside the boundary of the ancient city lie the ruins of the expansive Sanctuary of Hercules the Winner (dating from the second century BC) and Temple of the Tosse (probably dating to the fourth century AD). 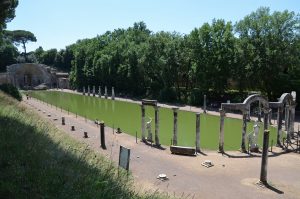 Tivoli in the Timetravlerome app 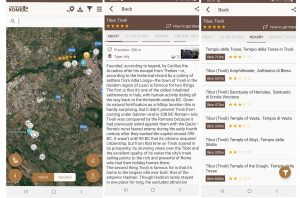 Header image: PanoramaMaritimeTheater, photo by DerPaul – Own work, licensed under CC BY 3.0

🪔 1/3 For #EpigraphyTuesday: Votive stele with a story of medical treatment from Epidauros (1-2 c AD). A wealthy Roman, who suffered from indigestion, expresses his gratitude to Asklepios & shares the healing process. 📜 His treatment produced good results. Read why 👉

🪔 For #MosaicMonday: mosaic panel with Satyr and nymph, from the cubiculum of House of the Faun, Pompeii. This house is also famous for its Alexander Mosaic, which depicts the Battle of Issus in 333 BC between Alexander the Great & Darius III.
📸 Photo: https://bit.ly/39Juow6

🪔 For eyes pleasure 🍬 : Intaglio with #Antinous, in black chalcedony (131-138 AD). It was once the prize piece of the famous Anton Maria Zanetti collection (18 c) - the italian engraver pursued this gem for years before acquiring it. Now with JP Getty 👉https://bit.ly/3PzXnCV

🪔 For #FrescoFriday: a roman wall fresco in a so-called "carpet" style, from Villa Ariana in Castellamare di Stabia, 1st-century AD. Now in the Archaeological Museum in Naples.📸 Pic 👉https://bit.ly/3yK3qyZ

🪔 For #ReliefWednesday: The Roman child sarcophagus. Its relief shows children playing with 🌰 nuts: two children on the left are guessing the number of nuts in their hands. The boy in the middle is throwing a nut at a target. Now in Vienna Museum. Link👉https://bit.ly/3PwFbtV