“Aphrodite went to Cyprus, to Paphos, where her precinct is and fragrant altar, and passed into her sweet-smelling temple.”– Homer

Before there were the gods and goddesses of Mount Olympus, the first deities were the Titans, sons and daughters of Gaia, Mother Earth, by Uranus, the sky. Yet Gaia grew angry with Uranus for imprisoning her other children, the cyclopes and the fifty headed monsters, in the pit of Tartarus. She incited her children to rise up against their father. Led by Cronus, her youngest son, the Titans overthrew Uranus, and Cronus castrated his father and threw those pieces into the sea. From them arose white foam, which took the form of a beautiful woman. It was Aphrodite, the goddess of love and beauty, and a seashell bore her to shore at Paphos on the island of Cyprus. 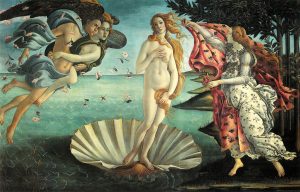 Today, the Paphos of Aphrodite’s emergence is known as Old Paphos or alternatively, Kouklia. “New Paphos,” which still dates back to before the legends of Troy, lies nearby, and its archeological park is a UNESCO World Heritage Site. The region is certainly worth a visit to enjoy the excitement of history and the mystery of myth.

This somewhat graphic origin story comes from Hesiod, but another places Aphrodite’s birth a generation later, as the daughter of Zeus and one of his many flings. Popularized by Homer, the second version became more widespread, and was the one accepted by the Romans as the origin for Venus. Upon emerging from the sea, Aphrodite’s first consort was the hero and king of Cyprus, Kinyras. They had several children together, including Myrrha and Adonis. Myrrha, either at her own request due to her uncontrollable lust for her father or in other tales due to Aphrodite’s jealousy over her daughter’s beauty, was turned into a fragrant bush from which we get myrrh. Meanwhile Adonis became his mother’s second lover. 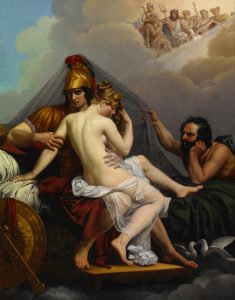 Eventually, Aphrodite was brought to Olympus to join the main Pantheon of gods and goddesses there. Fearing that the gods would devolve into physical violence in competition for Aphrodite’s hand, Zeus quickly gave her in marriage to Hephaestus, his crippled son and the god of smiths and forges, but also the most gentle and kind of the Olympian gods. This did little to impress Aphrodite, who much preferred Ares, the dashing, if somewhat shallow and bloodthirsty, god of war. When Hephaestus discovered their affair, he planned a devious revenge, designing an intricate net that trapped Aphrodite and Ares in bed the next time they met for their dalliances. Hephaestus, meanwhile, brought all of the Olympians to the bedchamber to laugh and mock the two trapped lovers.

Aphrodite is a key player in the myths surrounding the Trojan War, immortalized in Homer’s Iliad. Slighted at not being invited to an important wedding, Eris, the goddess of strife, sent to the proceedings a golden apple marked “for the fairest.” Aphrodite, Hera, and Athena all claimed it. To settle the dispute, they took the matter to Paris, a young prince of Troy. Each goddess sought to improve their chances by offering Paris a reward for choosing them. 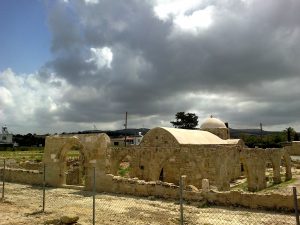 Athena offered him wisdom and great skill in battle, Hera offered power and wealth, and Aphrodite offered him the hand of the most beautiful woman in the world. Paris gave the apple to Aphrodite. Unfortunately, the most beautiful woman in the world, Helen, was already married. Even so, Aphrodite kept her promise, and Helen ran off with Paris to Troy, kicking off the ten year siege of the city by the Greeks to get her back in a war that saw the deaths of many great heroes on both sides. 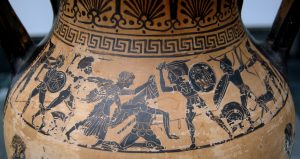 Aphrodite rescuing her son Aeneas wounded in fight, scene from The Iliad. By Bibi Saint-Pol – Own work, Public Domain.

Aphrodite, or Venus as the Romans knew her, also features heavily in Virgil, and in his story of the foundations of the Roman race. Venus is the mother of Aeneas, a Trojan hero who escapes the fall of the city and embarks on years of wanderings as he seeks the site of the great city he is destined to found. Throughout their journeys, Venus is there to oversee, usually matching her wits against the vengeful Juno, who despises the Trojans and seeks in particular to make Aeneas’s life miserable. Eventually Venus invokes the aid of her father and her husband, and helps Aeneas achieve victory over the Latins and found the city of Alba Longa, predecessor of Rome.

Despite her association with many other cities and stories, Paphos remained the most important site in the ancient world for worship of Aphrodite for centuries, absolutely agreed upon as the site of her rise from the sea. The Sanctuary of Aphrodite, remains of which are still visible, became the center of her cult, and predates Homer, as he mentioned it in his writings. The beach at Paphos where she is believed to have emerged remains a popular beach to this day, dominated by a large rock formation known as Aphrodite’s rock. Foam frequently forms around the base of this rock, and local legend claims that anyone who swims around the block will be blessed with eternal beauty. When conditions are right and the waves rise to break over the rock, it is said to form a column of foam that resembles the shape of a woman, perhaps a visual basis for the Aphrodite myth. 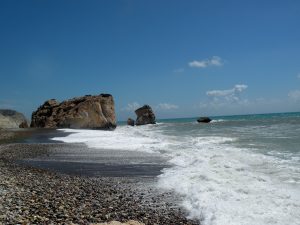 Athenaeus claimed that the origins of the myth are more specifically human, and were inspired by the beautiful courtesan Phryne, who enjoyed skinny dipping in the sea during the festivals of Eleusinia and Poseidonia. Phryne was famously brought to trial on charges of impiety. As the argument seemed to be moving against her, she bared her breasts to the court. Overwhelmed by her beauty and fearful of condemning a “prophetess and priestess of Aphrodite” to death, they voted to acquit. The tales regarding Aphrodite’s first and incestuous lovers may also have some basis in history, as the Kinyrid kings were known to marry their daughters after the death of their wives. Additionally, they frequently enjoyed “affairs” with the goddess Aphrodite through the medium of her temple prostitutes.

The site of Palaipaphos is as rich as you’d imagine for a site designated a UNESCO World Heritage Site. The archaeological remains include both residential and public buildings of exquisite richness. The Houses of Dionysus, Orpheus, Aion, and Theseus are all large, elaborate examples of Roman villas.

House of Dionysos at the Archeological Park, Paphos, Cyprus. By Zairon – Own work, CC BY-SA 4.0.

They are so named by merit of the exceptional mosaics contained within, and are well worth investigating. Excavations have also uncovered an Agora, an Asklepion (a healing sanctuary, dedicated to the god Asclepius), an Odeon, a Theatre, and a necropolis known as the Tombs of the Kings. 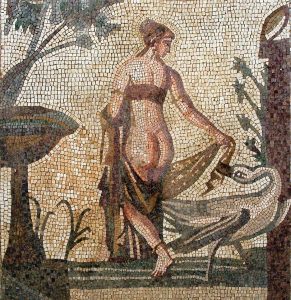 Tile mosaic depicting Leada and the Swan from the Sanctuary of Aphrodite, Palea Paphos; now in the Cyprus Museum, Nicosia. By Unknown author – Flickr user Ken and Nyetta. Public Domain.

For those interested in the history of early Christianity, there are also the remains of the Basilica of Panagia Limeniotissa (Our Lady of the Harbour), an early 5th century construction. Remains of the sanctuary of Aphrodite are also visible, and the wealth of smaller archaeological finds from the area is displayed at the on-site museum.

Paphos on the TimeTravelRome app: 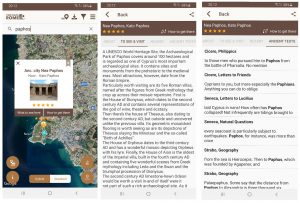 Source of the header image: Sanctuary of Aphrodite at Palaepafos, Cyprus. By Wojciech Biegun, CC BY-SA 3.0.