Theseus, the Minotaur, and the Minoans at Knossos

“May I therefore succeed in purifying Fable, making her submit to reason and take on the semblance of History.”

There is a particular thrill whenever it is discovered that ancient myths and legends have more basis in reality than was previously assumed, the mystical found rooted in reality. Such was the case when Heinrich Schliemann, a devoted lover of Homer’s Iliad, dedicated his millions to searching for the lost city of Troy. Though historians and scholars had long believed the city and the war described by Homer to be nothing more than myth, Schliemann eventually proved them all wrong. With elements of the Iliad now proved to be factual, historians combed over the epic poem in greater detail, gleaning details of the lifestyle of that era from around the tales of heroes and gallivanting gods.

Finding the Palace at Knossos

A similar story motivated the discovery of the Minoan Palace on the island of Crete.  Former soap manufacturer Minos Kalokairinos, a devotee of Homer, Plato, Strabo, and Pausanias, undertook his own private excavation to first reveal the site, and later English archeologist Arthur Evans continued the work. Their discovery of inscriptions at the site naming it as the city of Knossos and even making mention of a Minos firmly established elements of the myth as history, although the identity of Minos, or even his existence as a single individual, remains a mystery. 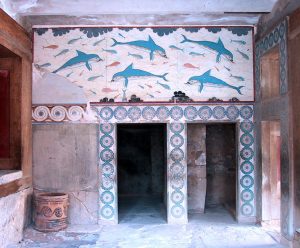 Various scholars have interpreted the word Minos as the Cretan word for king. Others argue that it was indeed the proper name of the first Minoan king that was later used as a title, similar to the way “Caesar” developed in the Roman world. The character of Minos the king of myth is also confusingly contradictory. In Greek literature, including Homer’s Iliad and Odyssey, Minos appears as a benevolent architect of Cretan civilization, laying down the laws of the nation with the help of direct instruction from Zeus. He was of such moral character that after his death, the gods appointed him a judge of the shades of the underworld. 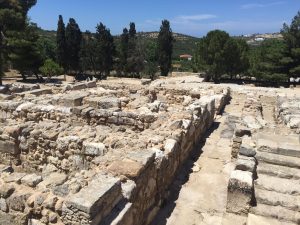 Yet this portrayal struggles against the Athenian picture of a tyrant who demanded that they provide human sacrifices each year to a monster. Diodorus Siculus and Plutarch both suggested that this was due to there being two. King Minos I was the benevolent ruler, son of Zeus, who founded Crete and its constitution. King Minos II, however, was the cruel despot at the center of the myths of the Minotaur.

Legends tell that Minos and his wife, Pasiphae, had angered Poseidon and he punished her by having her give birth to the Minotaur, a hideous monster, half man and half bull, which feasted on human flesh. Minos commissioned the famous architect, Daedalus, to design an intricate labyrinth under the palace were the Minotaur would be kept.  At the same time, Minos’s son, died while in Athens, and Minos demanded that Athens send recompense in the form of seven young men and women every nine years to be fed to the Minotaur. 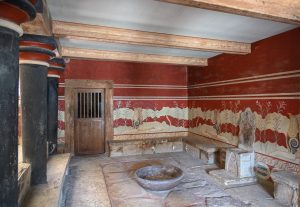 Just before the third payment of the tribute, King Aegeus of Athens was reunited with Theseus, who had been the son of an earlier fling with Aethra in Troezen. Theseus had learned of his birth father and traveled to meet him, completing many deeds of heroism along the way. King Aegeus was overjoyed to see his long lost son, but his happiness was short-lived. Learning of the tribute and the fates of the fourteen youths, Theseus became determined to kill the Minotaur and volunteered to take the place of one of the young men, despite his father’s pleas not to risk his life.

Theseus and the Minotaur

Theseus promised that should he succeed, he would replace the black sails of the ship with white ones to signal upon his return that he had survived. Imprisoned at Knossos, Theseus caught the eye of King Minos’s daughter, Ariadne, who begged Daedalus to help her save the handsome prince. Daedalus provided a magic ball of thread to guide Theseus through the labyrinth, and with its aid Theseus was able to find the Minotaur. After a desperate struggle, he killed the monster, and followed the thread back out of the labyrinth to escape with Ariadne and the other Athenians. 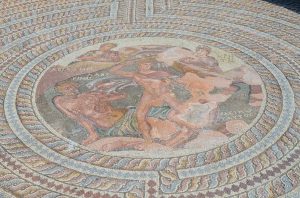 Sadly, he was forced to abandon Ariadne on an island after the god Dionysus appeared to inform Theseus he had claimed her as his wife. Furthermore, they were in such a rush fleeing Crete that they forgot to fly the white sails. As he stood on a high rock waiting for his son to return, King Aegeus was horrified to spot the black sails bound for the harbor. Believing his son dead, he flung himself from the cliff into the sea, the sea which now bears his name – the Aegean. Theseus returned in triumph only to learn that his father was dead, and joined Athens in mourning.

Truths in the Tales

Though “Minos” may have been a title for a king, the historian Herodotus makes mention of a specific King Minos, including the detail “Sarpedon and Minos [of Crete] fought for the throne and the victorious Minos expelled Sarpedon.” Though there is certainly no evidence of a Minotaur, bulls have long been a popular symbol on Crete, and they grace many of the decorations of the palace of Knossos. Arthur Evans, the archeologist who excavated the palace, suggested that the palace itself may have given rise to the stories of a labyrinth. As described by archeologist Michailidou, “It is amazing how long one can spend wandering in and out of these rooms, going up and down stairs and, frequently, much to one’s surprise, finding oneself back in the same room having come by a different route.” 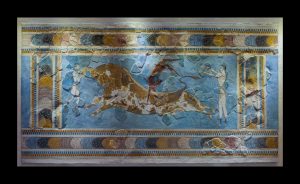 The word labyrinth also bears ties to labrys, meaning “double ax,” which was the symbol of an important Minoan goddess and can be found represented throughout the palace at Knossos. Being that the palace was, in part, a sanctuary of “labrys,” it is easy to see the development of tales of the labyrinth.  As the dominating Mediterranean power at the time, Crete could very well have demanded fourteen youths of exceptional character and honor, perhaps as hostages to ensure the loyalty of their subordinate nations, a common ancient practice. Yet another possibility is that those youths were indeed intended as human sacrifices to the gods, a sacrifice performed by a priest wearing a bull’s head – a true “Minotaur.”

Obviously the main site at Knossos in the Minoan Palace, first excavated at the turn of the twentieth century by Sir Arthur Evans. Knossos enjoyed its height of influence in the Minoan period, but it still remained an important trade city throughout the Mycenaean and Hellenistic eras, and enjoyed importance as a colony of Rome. 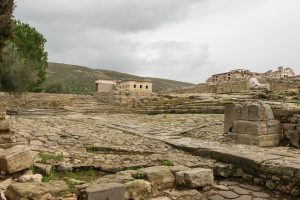 The theatral area of Knossos Palace. By Jebulon – Own work, CC0.

If you know where to look, you can find a modest share of those Roman remains today. North of the palace complex are the remains of the Roman Forum, on the western border of which is the once resplendent Villa of Dionysius complete with mosaic flooring. Vague traces of a theatre are also visible to the north, as are the ruins of two fifth century basilicas dating from the fifth century AD. Contextualizing the Roman remains at Knossos is, however, difficult because of our lack of literary information.

Please note that our App is focusing on the Roman history of the great ancient monuments and sites. 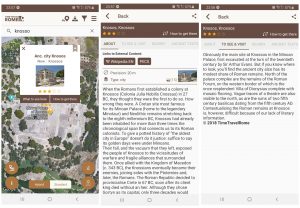